Switzerland and USA, b1964
The stylistic and technical range of Rondinone’s work is so broad it gives the impression that it could have been made by several artists. There are, however, motifs and themes that link his diverse productions. With confectionary colours and pop-culture references, he engages viewers by stimulating the senses, often invoking a carnival-like atmosphere. Playful and shiny, yet pensive and melancholy, his work deals with loneliness and disorientation and the hollowness of spectacle.

Rondinone participated in a Kaldor Public Art Project in 2003.

Installed in a stairwell at the Gallery, this series of 52 rectangles resembles windows, set in walls papered with newsprint, in which the people on the stairs are reflected. Combining saturated incandescent colours with this subtle hint at our mortality, the work has a curious tension between cheer and depression. Rondinone often creates hypnotic spaces that are difficult to make sense of. Following dada, he seems to suggest that contemporary life is an absurd existential void.

View clockwork for oracles in the collection

In this video, Rodinone discusses clockwork for oracles, which was commissioned especially for the Art Gallery of NSW new contemporary galleries as part of the John Kaldor Family Collection. 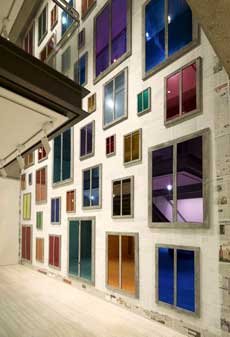