Egypt and Australia, b1962
Armanious creates duplicates of eclectic, everyday objects and presents them in a gallery, thereby turning them into fine art. He often creates his work through a form of self-automatism, tracing connections between words, images and objects or responding to images and shapes that certain materials suggest to him.

Armanious was born in Egypt but grew up in Australia, and this work reflects his experience of living in two cultures. It began with him transposing songs by Swedish pop group Abba into Arabic instrumentation, which you can hear in the soundtrack to this work. That process inspired him to replicate objects that recalled both Middle Eastern and modernist Scandinavian design, particularly objects that turn on a central axis.

View Turns in Arabba in the collection 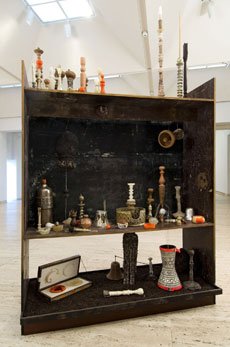