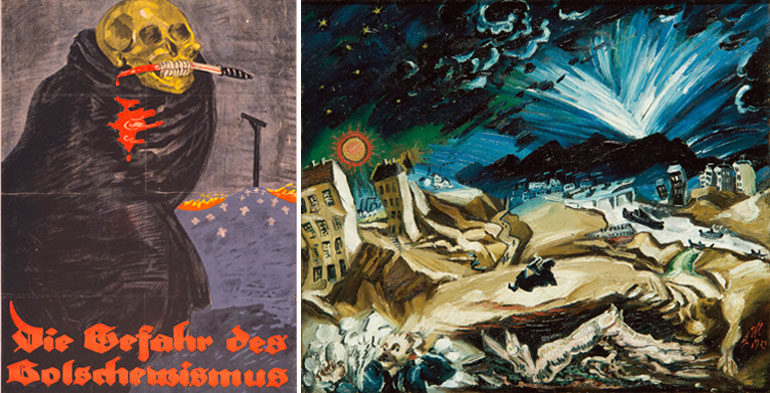 World War I and the revolution

Many artists and intellectuals in Germany responded enthusiastically to the outbreak of war in 1914, eagerly volunteering for service in the belief that it would bring cultural renewal and a rapid victory for Germany. However, this optimism soon gave way to the grim realisation of mechanised warfare’s potential to tear apart humanity and civilisation.

The works represented here are by the generation of artists who experienced war first-hand. These artists turned away from the bright sunlight depicted in many prewar Expressionist landscapes toward the representation of shredded nerves and nocturnal terror. These works show the devastating effects of war on the individual and society and depict fear, anxiety and violence.

The disturbing subjects provide important insights into the tough economic conditions and social dysfunction experienced by many during the tumultuous early years of the Weimar Republic (1918–33). During these years, a new democratic republic was founded in the town of Weimar in central eastern Germany after the abdication of the Kaiser in 1918 and the following year of violent revolution. To make matters worse, Germany was hit by an economic crisis and crippling hyperinflation that lasted from mid 1922 to the end of 1923.