By 1929, many modern artists in Germany sensed a prevailing loss of direction in avant-garde art and were simply unable to sell their work after the crash of the stock market in New York. This crisis of modernism had already begun by the late 1920s and dramatically worsened in the 1930s. The sharp decline in artistic production was exacerbated by the deteriorating political situation and the onset of the Great Depression, which resulted in mass unemployment and poverty across Germany.

This period of economic instability and political extremism marked a turning point for modern art. Artists realised that their situation was becoming increasingly precarious as the National Socialists expanded their power and launched their brutal campaign against modernism. After the seizure of power by Hitler in 1933, modern artists were forbidden from working and exhibiting in Germany. Their works were confiscated from leading museums and then destroyed or sold cheaply on the international art market. Artists were either forced to leave Germany or retreat into a state of ‘inner immigration’; sometimes, as in the case of Felix Nussbaum, they died in concentration camps.

The Degenerate art exhibition, held in Munich in 1937, represented the culmination of the National Socialists’ assault on modernism. Hundreds of works by leading painters and sculptors of the Weimar era were selected for the show which aimed to illustrate the mental deficiency and moral decay that had supposedly infiltrated modern German art. The works were displayed haphazardly with derogatory slogans to further discredit and ridicule modern art. Over two million people visited the exhibition in Munich, while far fewer saw the Great German art exhibition held nearby in the Nazi-designed House of German Art, which sought to promote what the Nazis considered as ‘healthy’ art.

Though many masterpieces of modern art were lost or destroyed through the ‘degenerate’ art campaign – which saw the confiscation of thousands of works from museums and private collections – many survived and are now held in collections around the world. The final section of this exhibition brings together a small group of these works to celebrate the achievements of these artists and their great contribution to modernism. 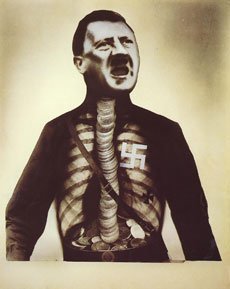