By the mid 1920s, a new style emerged that came to be known as Neue Sachlichkeit or New Objectivity. This term took its name from an exhibition organised in 1925 by Gustav Friedrich Hartlaub, director of the Kunsthalle in Mannheim. Hartlaub defined the features of this new tendency as the sharpening of the artist’s gaze, a sober concentration on the external appearance of the subject and a sense of emotional detachment. He identified two different variations of this style which he labelled as ‘right-wing’ and ‘left-wing’. George Grosz, Max Beckmann and Otto Dix were referred to as the ‘left-wing’ artists, or Verists, because they were committed to the truthful representation of their subjects. The ‘right-wing’ was a group of painters based in Munich including Alexander Kanoldt, Carlo Mense, Georg Schrimpf and Heinrich Maria Davringhausen.

Many artists felt the need to return to traditional modes of representation after experiencing the atrocities of World War I and the harsh conditions of life in postwar Germany. Portraiture became a major vehicle of expression for this group of artists, with its emphasis on the realistic representation of the human figure. Artists mostly chose their own models rather than seeking out commissioned portraits. The purpose of these portraits was to create a picture of the era by portraying people who helped to shape Weimar culture. 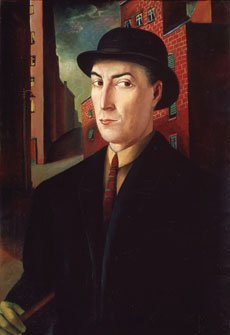