The butterfly dream – a collection of photographs taken over a period of 46 years – represents Hosoe’s homage to the charismatic butoh dancer Kazuo Ohno. It was published as a book, which was released on 27 October 2006 in celebration of Ohno’s 100th birthday.

Originally an instructor in physical education and performer of modern dance, Ohno befriended Tatsumi Hijikata in the 1950s and became a pivotal figure in the development of the butoh performance movement. Ohno’s poetic dance style stems from his belief in the transcendental nature of human experience, that the human body has a memory of sensations and knows no limits of self-expression.

Following closely his friend’s extremely long and successful career – Ohno continued to perform late into his 90s – Hosoe has captured some of the most poignant and magical moments in the history of butoh. In honour of Ohno’s long-held conviction in the importance of achieving freedom of body and mind, Hosoe named his photographic exploration of Ohno’s unique art after the famous Daoist allegory in which the philosopher Zhuangzi dreamt he was a butterfly, but once awake, wondered if he was a man dreaming to be a butterfly or a butterfly dreaming to be Zhuangzi. 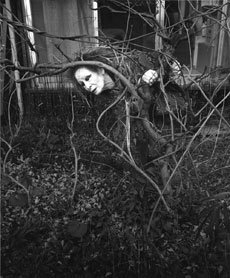