Today butoh is widely acknowledged as an avant-garde dance form, but originally it was an underground movement that emerged in Japan in the aftermath of World War Two. At that time, many artists and intellectuals were struggling to shake off the weight of Japanese tradition – as well as the force of Westernisation ensuing from the US occupation – to redefine the identity of a new generation.

Within this chaotic socio-political climate, Tatsumi Hijikata (1928–86) and Kazuo Ohno (1906–2010), sought to formulate a new performance or dance style that would be true to their ethnic roots and the Japanese physique, free the body from conventional beauty ideals and perfection, while drawing inspiration from the art and poetry of European-based sadaism, surrealism and the existentialist Theatre of the Absurd, as well as German expressionist dance, Neue Tanz.

Hijikata created the term ankoku butoh or ‘dance of darkness’, to denote a cosmological dance which departed completely from existing dance movements and explored the taboo and the extreme, the psychological and physical, in short, the most hidden, dark side of human emotions.

Since the 1970s, new generations of butoh dancers have emerged in Japan and abroad. Their different approaches has lead to a diversification in butoh dance, so much so that today butoh is defined by its very evasion of definition: it has no fixed style. 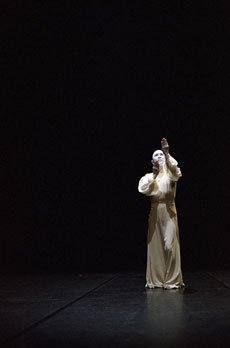