Today, it is photography, not painting, that provides our chief visual images of the world and ourselves. Indeed it is hard to imagine life before photography.

Historians argue about photography’s exact date of birth. Silhouetted images, or ‘photograms’, had been made earlier by Thomas Wedgwood in 1802: he placed small objects on surfaces covered with silver nitrate which turned black when exposed to the sun, but the images could not be made permanent. In 1816, Joseph Nicéphore Niépce partially recorded and fixed a of a ‘camera obscura’ image, but it took another 11 years before he could preserve a picture. It would be Louis Daguerre who would win the accolades by providing beautifully detailed images on silvered copper plate in 1839. However, the long exposures (up to 15 minutes) and the dangerous chemicals needed were a handicap for the demands of a popular market.

Improvement in lens construction and the development of a negative/positive process by William Henry Fox Talbot in 1841 helped make photography simpler and more flexible, and allowed copies to be multiplied. In 1844, Talbot published the world’s first book illustrated with photographs called The pencil of nature.

Over the next 25 years, photography remained a craft that required professional skill with the use of glass plates and a wet collodion process; nonetheless it meant that countless people could now have photographs of themselves and family members. When plates or flexible rolls of film with fast-drying emulsions became available in the 1870s and ’80s, the medium became industrialised and far more democratic. In 1888, it became big business when George Eastman patented and marketed his portable Kodak camera to amateurs: ‘You press the button – we do the rest’.

Digitisation has not seen the demise of analogue (or wet) photography and, therefore, the end of manual processing. The strength of the medium lies as much in its virtuosity as in the imaginative triggers it provides for its audience.

Over the last 150 years, photography has also been widely recognised as a major artform. Critics, art historians and theorists have greatly refined our understanding of the medium. John Szarkowski, the influential director of the Department of Photography at New York’s Museum of Modern Art, helped set the terms for critical discussion. His 1973 book Looking at photographs: 100 pictures from the collection of the Museum of Modern Art outlined the formal properties of the photograph, including frame, detail, time and vantage point.

By the 1970s, celebrated photographers such as Alfred Stieglitz, Julia Margaret Cameron, Edward Weston and Ansel Adams were routinely collected. Dozens of dealer-galleries devoted to fine art photography mushroomed in the United States and Europe. By the late 1970s, art photography had also arrived in a big way in Australia and by the 1980s, artists like Cindy Sherman or Robert Mapplethorpe were selling work for up to $50 000.

Photography continues to engage and excite because of its close relationship to memory, time and the real. The many and various interpretations of these relationships add to the ongoing enigma of the photograph, whether it is a snapshot, news item, art object or an imaginative and interpretive record.

Adapted from Focus on photography: an education kit for the photography collection 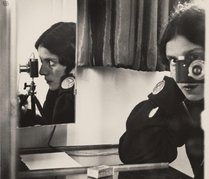