The astronaut is discovered by a dreaming pierrot 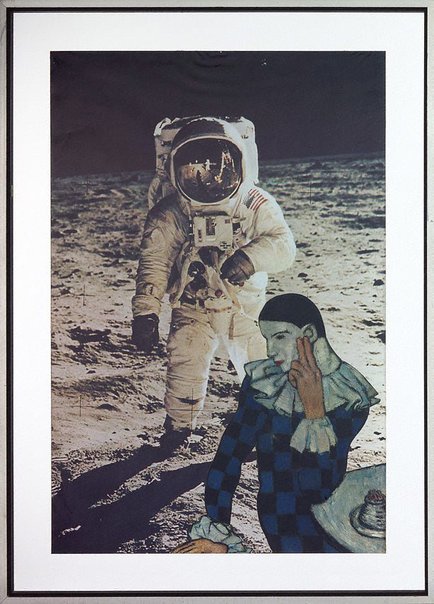 Upon his return to Sydney in 1970, Sharp presented a group of works he had exhibited in London at the Sigi Krauss Gallery—the aptly named 'Artoons'—at the old Clune Galleries site in Sydney's Potts Point, soon to become the Yellow House. Armed with a pair of scissors, a pot of glue, and books and magazines filled with images from every imaginable epoch and culture, Sharp delighted in finding new relationships in plundered images from the past. In Still life he merges Vincent van Gogh’s golden-hued Sunflowers with the peroxided head of Andy Warhol's Marilyn Monroe. Another morphs Goya's relining nude, La maja desnuda, with the seated figure of Whistler's mother, obscuring the matronly face, shoulders and skirt with her rosy flesh, 'A reminder that in every uncompromising old lady there are vestiges of a voluptuous young woman', Sharp once commented.

In this wonderfully anachronous collage, The astronaut is discovered by a dreaming pierrot, Sharp takes the iconic image of American astronaut Edwin 'Buzz' Aldrin on the first moon landing in 1969, and unifies it with one of the most poignant images from Picasso's Blue period, Harlequin (1901). Using blue and cool tones to create an austere, melancholy image, the painting reflects Picasso’s profound feelings after the recent suicide of his friend Carlos Casagemas. The black stillness of space, where 'no-one can hear you scream', echoes the silent stare of the forlorn harlequin.
In the 1980s Sharp developed these early ‘Artoons’ into what became 'Appropriations'—painted versions of the collages he first explored in the late 1960s and early 1970s.

Martin Sharp
The astronaut is discovered by a dreaming pierrot 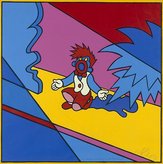 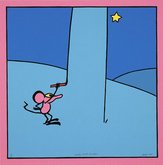 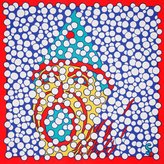