The night is a tree of pain

'The night is a tree of pain' was painted at Hodgkinson's Clareville home on Sydney's Pittwater. He had been in Spain since 1958, following his win in the inaugural Helena Rubinstein Travelling Art Scholarship, and returned again in 1963, settling at Deya de Mallorca, where his neighbours included the poet Robert Graves, and fellow Australian artists John Olsen and Paul Haefliger.

In 1963, Hodgkinson wrote:
"The title ... is a line from a forgotten Indian poem ... not intended to be descriptive but rather to suggest a mood. Though the forms relate to earthy natural growth, human and animal life, the image which teased me was the monumental stillness of totems, a symmetry suggested by the gum tree, natural totems rather than the carved and painted aboriginal ones, creating a tortured and ecstatic silence such as may be experienced in the bush at night".

Applying the knowledge he had gained abroad of Abstract Expressionism and the school of texture or matter painting - exemplified in the work of Spanish artists Tàpies, Milliares, and Suarez - Hodgkinson attempted to create in his paintings of the early 1960s, a uniform all-over texture, which evoked the coarse beauty of raw earth and a strong sense of natural substance, whilst making particular reference to the rugged bush of the area around his home.

Purchased under the terms of the Florence Turner Blake Bequest 1963

Frank Hodgkinson
The night is a tree of pain 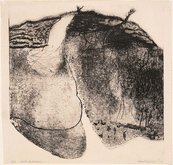 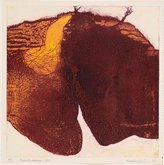 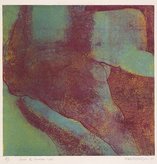 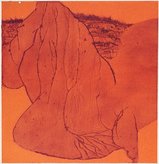 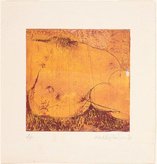