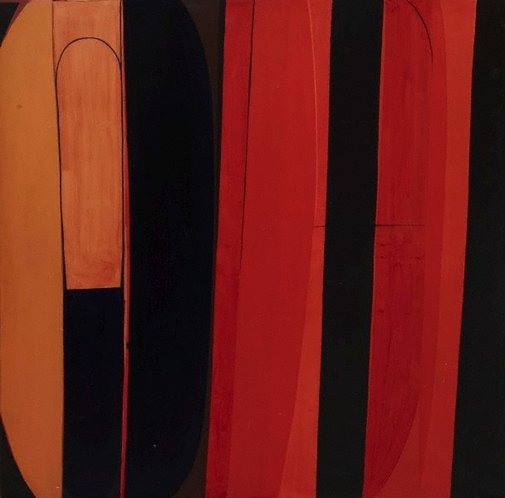 In a letter to the Curator at the Art Gallery of New South Wales, Renee Free, dated 9 December 1967, the artist wrote from London:

"Regarding the 'Manolete' painting, the working collages and drawings were done in Cordoba, Spain, and the finished painting in London, as it was easier to transport from there.

A quick biography of Manolete might help me to clarify my ideas for the picture.

He died in 1947 aged 30 at the end of what was to be his retiring year. He was killed killing the bull. He was the greatest matador of his era, some experts say of all time. A shy, serious quiet man, completely dedicated to his art and for the Spanish public he epitomised their post war need for a noble figure of dignity.

Born in the cradle of bull-flighting, Cordoba, and had the typical rag to riches history of the classical bullfighter.

I have tried to paint the passion and tragedy of his art - which was an integral part of his life and also to catch something of the ideal Spanish characters by the use of fairly stark forms and little tonal variation. I then had to make these move without monotony and when I read James Gleeson who said they did so 'with the sombre insistence of a dirge' I felt I had suceeded for one person at least!"

Browse other works by Janet Alderson