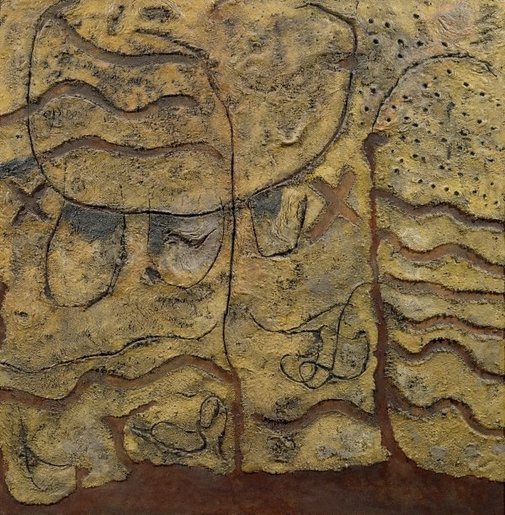 Artist, writer, curator, critic, adminstrator - Elwyn Lynn was unstinting in his lifelong dedication to art, both as practitioner and observer. As member, then president, of Sydney's Contemporary Art Society, he was a major contributor, and editor from 1955, to its newsletter, the CAS Broadsheet, and in the late 1950s and early 1960s wrote extensively on texture painting.

Lynn's early interest in surface, ground and texture, had the collages of Picasso, Kurt Schwitters' Merz pictures, and Klee as precursors, however the discovery of the works of the Spaniards Tàpies, Feito, Cuixart, Millares and Saura, provoked further research into the entire movement. He looked, in particular, at the work of Dubuffet, Jean Fautrier, and the Italian Alberto Burri.

'Battle plan' exudes an immense physical presence with its allusions to cracked and eroded terrain, as Robert Hughes wrote in 1963:
"His hard pastes - smooth as ancient rocks, perforated with holes or creased and sagging like skin - inhabit an area of significant experience, which lies wholly beyond drama or declamation. It is an art of silences ... the essential quality of [his] pictures ... is their Sartrean "otherness": the silent wrinkled hides, the grey intrusive blocks of matter, even the glued-on fragments of lettering, go on existing whether we look at them or not. No effort of ours changes their contained identity". 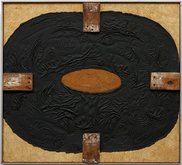 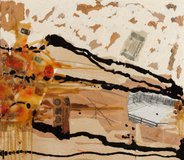 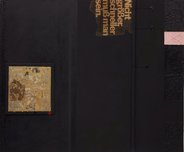 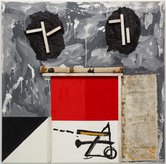