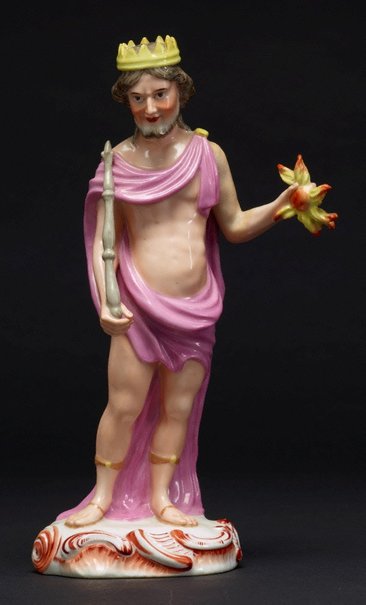 The gods of Olympus: Jupiter wears a crown and holds a sceptre and thunderbolt; Saturn (L2012.202) devours his own children; Juno (L2012.204) is armed with a helmet and shield; an effeminate Apollo (L2012.205) holds a symbol of the sun; Diana (L2012.206) has a moon and arrow in her hands and a crescent moon in her hair; the messenger god Mercury (L2012.207) has his caduceus and is about to deliver a letter. The unknown Wallendorf modeller was probably hoping to emulate a rather more sophisticated set of gods modelled by Wenzel Neu for the nearby Kloster Weilsdorf factory c1765.