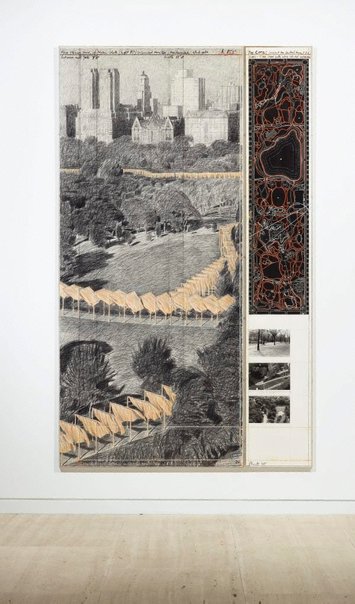 Conceived in 1979, this ambitious project punctuated the winding paths of New York’s Central Park with fabric for 16 days during February 2005.

'The Gates' was inspired by Frederick Law Olmsted’s original design for Central Park that included gates at the start of each of the park’s many walkways. Christo and Jeanne-Claude developed this concept to create their continuous stream of fabric gates; each constructed with rectangular frames almost five metres tall and between 2.7 and 8.5 metres wide to accommodate the varying widths of the footpaths, and supporting a fabric panel. The 7503 gates were positioned along 37 kilometres of Central Park’s walkways, transforming the meandering paths with a sea of billowing saffron fabric.

'The Gates' was the final work the artists completed together before Jeanne-Claude’s death in 2009.