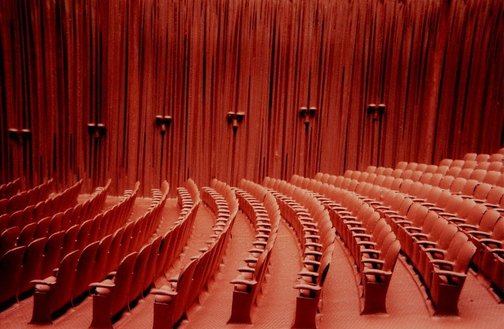 In their combination of sculpture, film, installation and painting, Olde Wolbers' videos present an intricate and visually seductive blend of words and images. Her work generates a tension between reality and simulation in both concept and technique: fictional stories in the form of reportage provide the soundtrack while fantastical and carefully hand-constructed landscapes or extraordinary interiors provide the visual focus.

In 'Trailer' a man, Algfar Dalio, discovers that his parents were C-list actors in the 1930s. Watching the trailer for a film he learns that his parents were lost in a jungle while shooting their last film. He then spends hours in cinemas watching old movies in the hope that his parents will appear, their roles being so minor that they are not credited. Two species of poisonous plants are named in honour of Dalio's lost parents: a species of flytrap entitled Elmore Vella and Ring Kittle, an old red back tree. The video moves seamlessly between a theatre of maroon surfaces and an astonishing jungle of flytraps and plants - meticulously created by Olde Wolbers - that reference Dalio's search for clues and meaning. 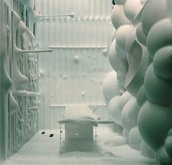