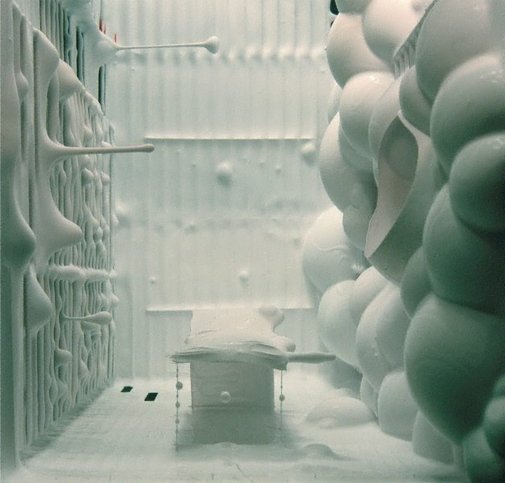 Placebo is a fictional story based on the syndrome Pseudoligica Phantastica, where invented experiences are presented as reality.

The video is set within the intensive care unit of a hospital with the off-screen narrative told by the mistress of a supposedly married man who claims he is a surgeon. Regaining consciousness after a car crash that her now comatose lover orchestrated, she begins to unravel his intricate web of deceit.

Images of empty hospital interiors, a drip, effervescent pills and various molecular structures, melt away into liquid globules. Placebo is filmed in real time in miniature sets covered in paint and submerged in water.

A soundtrack of electronic samples plays in tune with the melting droplets.
From: http://www.saskiaoldewolbers.com/works/placebo-video-stills-synopsis/