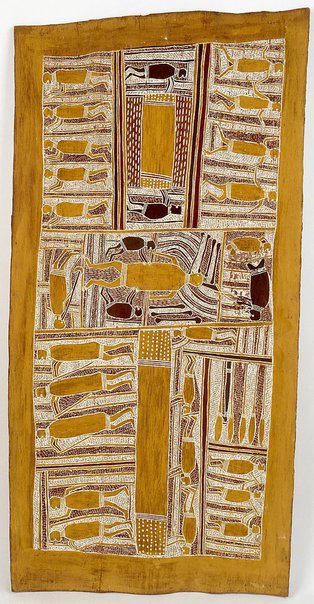 In the center section Muraruma's body is being disinterred by two of his clansmen. Decay associated with maggots is depicted by white dashes around the body and the cross-hatching represents the earth dug from the grave and dust raised by the dancers. A yidaki (digeridoo) player with paperbark resonator, songman with clapsticks and one of Muraruma's wives are all depicted in this section. The four dancing figures (lower left) painted with clay and carrying dancing sticks are taking part in the ceremony. The bones were then wrapped in paper bark and taken to Yirrkala and kept until a bone-carrying bark was prepared. A shield of bushes was erected (shown by vertical red, yellow and black lines) to make private their activities. The bone-carrying bark was cut, rolled into a cylindrical shape and painted, the bones placed therein, and the ends stopped up with wild bees wax. The white dashes around the receptacle represent maggots. Five dancing figures (lower right) are depicted taking part in the ceremony. After two years, a hollow log bone post was made and painted into which the bones were transferred after being broken up. In the top section four clansmen are depicted erecting the post. Five are shown dancing, carrying dancing sticks, and three women (top left) are carrying banyan string. The vertical strip of red represents an area cleared for dancing, and the cross-hatching denotes that the scene is amongst trees. The wooden shovel spears and woomera shown are of the type used to kill Muraruma.

© Information provided by the artist

Browse other works by Mawalan Marika

Mawalan MarikaCeremonial dancing for dead baby and baby being ... circa 1959IA51.1959