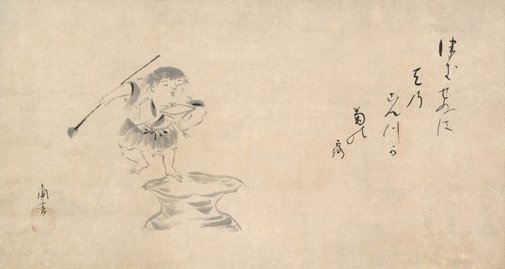 The poem reads: Inexhaustible is / The water of chrysanthemums / From the heavenly Chrysanthemum River.
It praises sake (Japanese rice wine) as a drink of immortality by likening it to the chrysanthemum dews, by drinking which Kikujidô [Chrysanthemum boy], a legendary figure, obtained eternal youth. Shôjô is also a mythical creature that loves sake and is synonymous with a heavy drinker. There is a nô play called Shôjô, in which the creature becomes drunk and begins to dance.

Legend has it that Kikujidô was a servant boy to the emperor Mu of the Zhou dynasty. He was sent in exile to Li County of Nanyang Prefecture [present day Henan Province] where he became immortal by drinking the water of the Chrysanthemum River. It was believed that the river water contained the dew from chrysanthemums growing along its upper stream and very sweet, and that one who drank it gained a long life.

Gift of the Japanese Ministry of Foreign Affairs, through Professor Toru Mori 1963