Images of the Amida Buddha 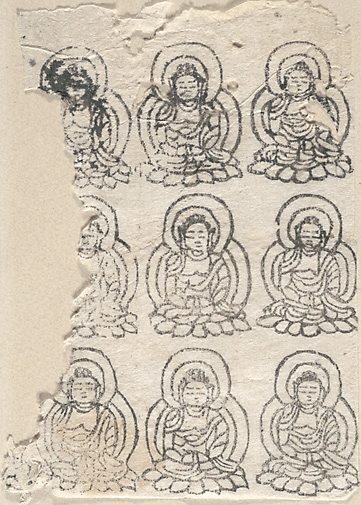 Printed on extremely thin mulberry paper, this fragment of seven images and two part-images reportedly comes from Joruriji, a temple east of Nara. Several sheets were found inside a sculpture. These particular representations of Amida are the oldest-known woodblock prints of holy images still existing, and other specimens of sheets of Amida figures found at Joruriji are classified as National Treasures.

The Joruriji temple was founded in 1047 as a dedication to the Medicine Buddha Yakushi but was converted to a place of worship for Amida in the early 1100s. The Amida Buddha images sit in the full lotus position on lotus leaves. Their hands are in the gesture ('mudra') of concentration. It was believed that the more images one produced or paid to have produced, the more blessings one accrued. This led to the production of sheets with the same image printed (or stamped) in repetitive rows.

The earliest Buddhist woodblock images, produced in China and Korea, are associated with the reproduction of scriptures and images for ritual purposes. The influential ‘Lotus sutra’ promoted the idea of the replication of text and image as a meritorious practice through which individuals would ‘become fully endowed with a mind of great compassion’ (1). Buddhist woodblock printing in Japan developed in response to this belief in the spiritual efficacy of repeated acts of devotion, most popularly expressed through the recitation of the name of Amida Buddha (‘nenbutsu’) (2)

The ‘Images of the Amida Buddha’ are from a set of the oldest known Japanese woodblock prints of Buddhist images still extant and reportedly found inside a Heian-period statue of Amida Buddha from Jōruri Temple, east of Nara (3). The sealing of relics, including woodblock prints, within statues was an important part of consecration rites. The practice of making multiple depictions of a Buddha image is also derived from the Mahayana notion that the historical Śakyamuni Buddha was just one of countless buddhas, each of whom could also manifest in multiple forms (4)

Images of the Amida Buddha