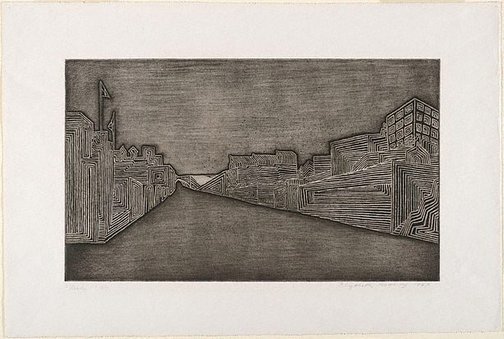 Elizabeth Rooney was born in Sydney and studied painting and drawing at East Sydney Technical College 1945-49 where her contemporaries included Guy Warren and Tony Tuckson. Towards the end of her course, she began making etchings under the influence of one of her teachers, Herbert Gallop. As a member of the Contemporary Art Society in the 1950s, she exhibited paintings and prints which are experimental in the use of materials as well as subject. Largely self-taught as a printmaker, she gained most of her technical expertise through experimentation, reading the publications of S W Hayter and consulting with other printmakers. Her first etching press was given to her in 1954 by Bim Hilder. A key figure in the contemporary printmaking revival that occurred in Sydney in the early 1960s, she was a foundation member of the Sydney Printmakers group that included Henry Salkauskas, Earle Backen and Eva Kubbos, and with whom she exhibited through the 1960s. She was also co-founder with Joy Ewart of the Workshop Arts Centre, Willoughby in 1961.

'Rocks I' is from a series of three produced in 1967 and is based on the architecture of the Rocks area, near Circular Quay, Sydney. The plate is deeply etched; it was also printed without ink as an embossed image.

Browse other works by Elizabeth Rooney