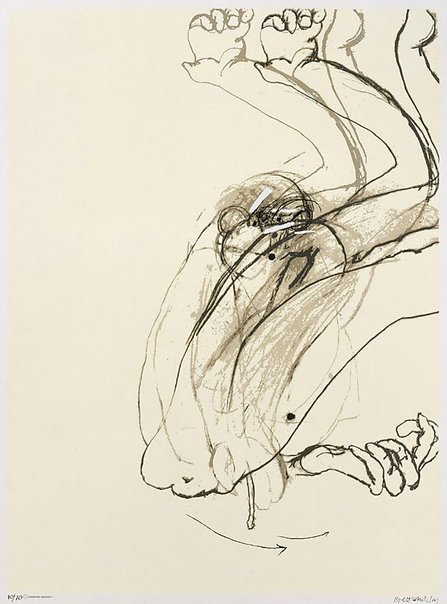 Brett Whiteley was born in Sydney and attended drawing classes sporadically at East Sydney Technical College and the Julian Ashton Art School before winning the Italian Government Travelling Art Scholarship in 1959. He travelled throughout Italy in 1960, visited London and Paris and settled in London that November. He was awarded a Harkness Scholarship in 1967 which took him to New York for two years. He travelled and exhibited in England, Europe and America before returning to Australia permanently at the end of 1969.

'Swinging monkey 1' is the first of six colour screenprints plus title page in a portfolio of prints made by Whiteley while in London in 1965, and one of seven by him printed at the Kelpra Studio that year. The development of photo-stencils by Christopher Prater enabled the combination of collage and screenprinting. The set was exhibited at Marlborough Gallery in October that year. The related drawing 'Swinging monkey' c.1964-65 (charcoal, ink, collage) is in a private collection in Sydney (Barry Pearce, 'Brett Whiteley, art and life', AGNSW, 1995, fig.no. 9).

The Kelpra Studio was founded in London in 1958 by Christopher Prater for the production of commercial screenprints and began making artists' screenprints in 1961.

"The first time I came into printmaking, apart from a couple of serigraph experiments for Ganymed Press for my first one-man show of abstractions in 1961, was the Regents Park Zoo series in 1961 that I made with Prater at the Kelpra Studios, London. This was the first time I really took printmaking & especially silk screen really seriously. It was more than just a way of breeding gouaches, it was the first time I conceived in series, where each print would confirm or contradict the image before it, and also it offered the challenge of seeing just what was possible using screen with photography & colour. The very flatness of screenprinting suited me perfectly, as the shallow picture-plane that I used in oil painting, which had been greatly influenced by Piero and 15th century Italian painting, was exactly the same approach to building up a vision in both cases, skin over skin, using only line to injure or excite the stillness of colour. The last screen to be used each time in this series was always aimed at a thin nervous black line that would bring a third space or irony to the subject" (Brett Whiteley, 'A few words about printmaking' in Robert Mandy, 'Brett Whiteley, the complete graphics 1961-1992', Melbourne: Deutscher Fine Art, 1995, pg. 4).

A retrospective of Whiteley's work was organized by the Gallery in 1995; it also administers the Brett Whiteley Studio in Sydney as a public museum on behalf of the State Government of NSW.

Hendrik Kolenberg, Animals on paper - from the Australian collection of prints, drawings and watercolours, Sydney, 1992. cat.no. 91