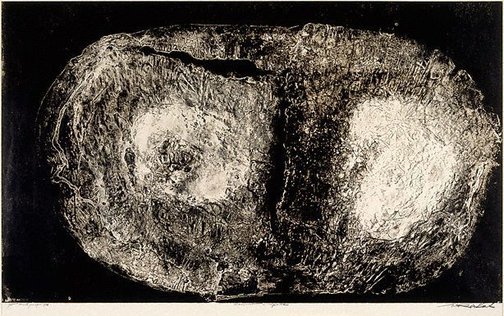 Vaclovas Ratas (Rataiskas) was born in Paliepsis, Lithuania. After graduating from the Kaunas School of Art in 1935, he studied in Italy. He worked as a curator at the M K Ciurlionis Gallery, Kaunas 1937-44, and from 1945-49 headed an art school in Augsberg, Germany. His wood engravings were used to illustrate books in Lithuania and Germany. He emigrated to Australia as a displaced person in 1949, arriving in Perth. He moved to Sydney in 1954. He was a foundation member of the Sydney Printmakers with Eva Kubbos, Henry Salkauskas and critic Laurie Thomas, and a member of the Contemporary Art Society. His work grew more experimental over these years - for example, in 1959 he began making relief prints from carved blocks of plaster. His work was included in the 1963-64 'Australian Print Survey'.

'Fragment in space' was exhibited with the Sydney Printmakers in 1967 (Sydney Printmakers, 1967 Farmer's Blaxland Gallery, Sydney, 12-23 September 1967, (27)). He described the technique he used in a letter to the Gallery in 1967; "metal graphic ... made by building up the printing surface with metal. It was rubbed from the back. No pressure marks because the print was made on dry thin paper". 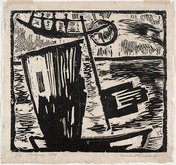