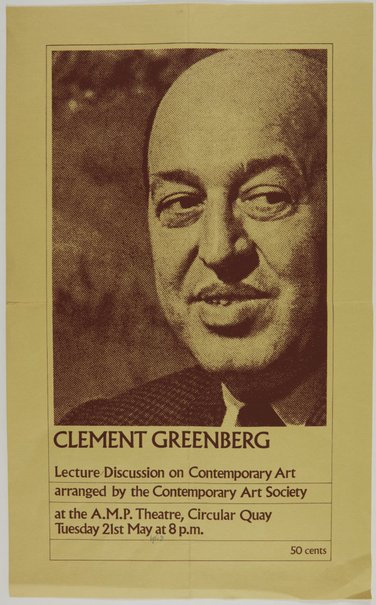 Daniel Thomas, who was curator at the Art Gallery of New South Wales in 1968, recalled about the visit of Greenberg to Australia: 'Clement Greenberg, from the 1940s to the 1960s a highly influential New York art critic and supporter of Abstract Expressionism and Post-Painterly Abstraction, was nearing the end of his heyday when invited to deliver the inaugural John Power Lecture in Contemporary Art — “Avant-garde Attitudes: New art in the sixties” — at the newly established Power Institute of Fine Arts at the University of Sydney.'
The Power lecture was given on the 17 May at the Stephen Roberts Theatre at Sydney University. On 24 June at the same venue Greenberg gave a more informal talk on his general impressions of Australian art. On 25 June he left for a fortnight in New Zealand. In between these dates he spoke in Melbourne, Canberra, Hobart, Adelaide, Perth and Brisbane, including this lecture organised by the Contemporary Art Society.