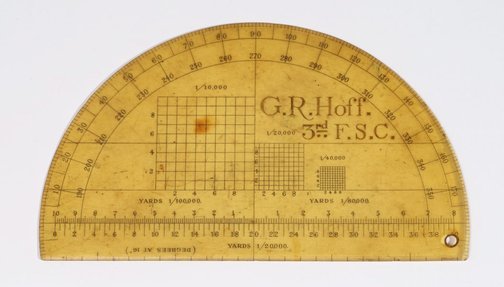 Rayner Hoff served in the British Army in the Great War for three and a half years, from April 1916 to October 1919. Although he did not participate in any frontline fighting, he served in a reserve position behind the front in Picardy in France, and saw the results of the terrible slaughter of trench warfare. For most of the war he was part of the Royal Engineers, seconded into a Field Survey Company to draw and make military maps. While in the field, he carved his name GR Hoff, (George Rayner Hoff) 3rd FSC (Third Field Survey Company) into his well-used scaled protractor.