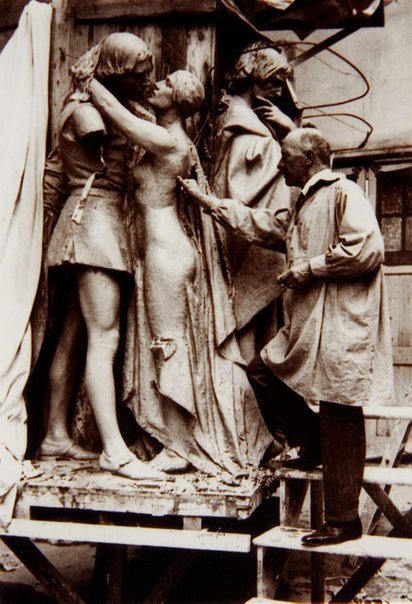 Bertram Mackennal created the Shakespeare Memorial in Sydney at the request of journalist and former president of the Shakespeare Society of New South Wales, Henry Gullett. Gullett began negotations with Mackennal in 1912, however, the commission was halted due to Gullett's sudden death in 1914. Gullett's family pressed on with the memorial, which was unveiled in 1926. Five figures from Shakespeare's plays stand beneath the central figure of the playwright himself: Romeo and Juliet, Hamlet, Portia and Falstaff. The Shakespeare Memorial sits opposite the Mitchell Library of the State Library of New South Wales in Shakespeare Place.

On the back of this photograph the artist's granddaughter, Pauline Kraay has typed "The Shakespeare Memorial Group was erected in Sydney. At the time there was much criticism from the public, Shakespeare lovers of different opinions as to which characters were more important and should be included in the group".

Unknown
after Lord Frederic LeightonArts as applied to war post 1883153

Unknown
after Joseph Mallord William TurnerDevonport and dockyard, Devonshire circa 1827-circa 18382001.41