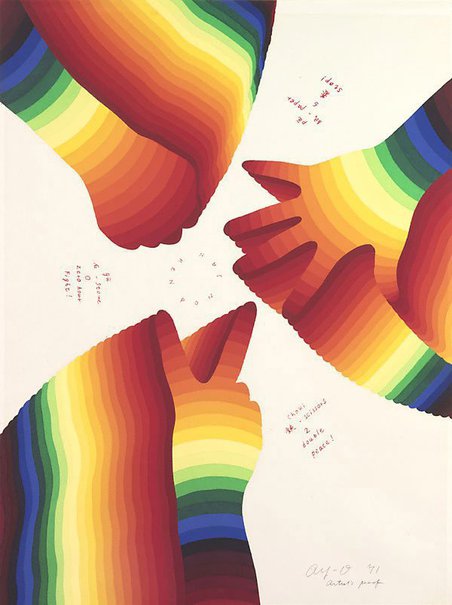 AY-O, whose unusual name is written with two obscure Chinese characters meaning 'cloud trailing nausea' (a jokey name), was born Iijima Takao in Ibaragi Prefecture, graduated from Tokyo University of Education and now lives in Tokyo. AY-O is of the generation of younger Japanese printmakers who rejected traditional woodblock techniques, preferring the medium of silkscreen, and looked to the West for new ideas, particularly the USA. The decade 1960-70 saw a lot of young Japanese printmakers, including AY-O, living and working in America. AY-O, as obvious from his preference for bright, bold juxtapositioning of colours, was much influenced by Pop Art. In subjects his prints range from the figurative to the abstract, all depicted in his distinctive rainbow bands of colour. AY-O has been active with the Fluxus group since 1962 and was one of the leading figures of Japanese printmaking of the 1970s.

The subject in this print is based on the children's game of counting to three and then holding one's fist out in one of three ways: flat = paper; clenched = rock; first two fingers apart = scissors. Scissors are stronger than paper; a rock is stronger than scissors as it can smash them; and paper is more powerful than a rock as it can envelop it. The winner is the one whose fist forms the more dominant element.

Browse other works by Ay-O