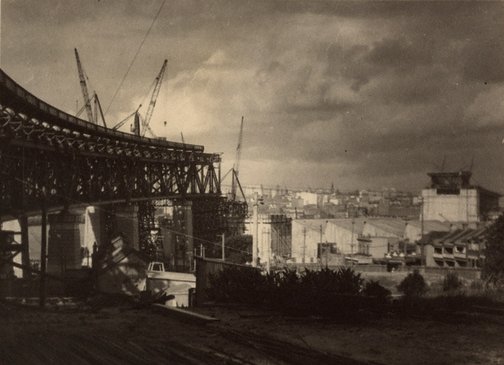 Henri Marie Joseph Mallard was born to French immigrant parents in Sydney. In 1900 he began working for Harrington’s photographic suppliers and eventually spent his entire working-life there, moving up from junior office boy to general manager. There he became a mentor to local photographers and was remembered for his generosity and good nature. He began exhibiting his own photographic work from 1904. He also took an early interest in film and coached Frank Hurley on the medium before Hurley went to the Antarctic. Mallard himself filmed the building of the Sydney Harbour Bridge. He retired from Harrington’s in 1951.

The Sydney Harbour Bridge was opened on 19 March 1932. Max Dupain thought the construction of the bridge marked the end of Australian pictorialism: ‘then, dramatically, this arty pictorial approach changed … Australian photographers had begun to apprehend machine form and function and to relate it not as a first or second cousin, but as a blood brother to the camera.’1 This was an exaggeration: the bridge as a subject was amenable to romantic, pictorialist interpretations as well as modernist ones. Mallard, one of the most comprehensive documenters of the bridge in both photography and cinematography, used both languages. Some of his photographs are sharp and modern in feel, based on the dramatic geometry of the steel structure. This one, however, with its fine tonal range and panoramic vista is more recognisably pictorialist. It is an early photograph from his series documenting the bridge in construction and shows the recently built bridge approaches.

Browse other works by Henri Mallard 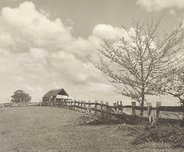