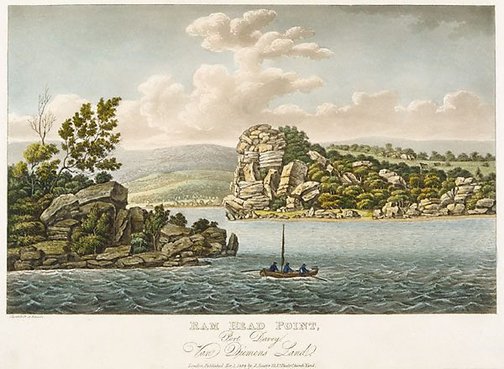 Joseph Lycett's date and place of birth are unknown but he was christened at Leigh, Staffordshire on 25 March 1775. He arrived in Sydney on the 'General Hewitt' (the same ship as architect Francis Greenway) on 7 February 1814 to serve a fourteen year sentence for forgery. Although he was granted a ticket of leave on 25 March that same year, he was re-convicted of the same offence in 1815 and sent to the secondary penal settlement at Newcastle.

What is known of Lycett's time in the colony is largely dependent on the surviving works of art he produced, as he is rarely mentioned in official papers or contemporary accounts; it is known, however, that as a convict he executed a considerable number of watercolours, drawings and some oils for private patrons and for Governor Macquarie. He copied architectural plans for the Governor's wife and for Captain Wallis, the commandant at Newcastle, and made botanical drawings. While in Newcastle he made a number of watercolours depicting the local Aborigines and their customs, and decorated the interior of the newly constructed Christ Church. In 1821 he received an absolute pardon after seven years in the colony, and returned to London in 1822. It was in England that his best known images of the colonies were made.

He executed a number of prints in 1824, to be issued in his publication 'Views in Australia', which was to appear in twelve monthly parts, each to contain two views of NSW and two of Van Diemen's Land, with descriptions and a map supplement. They sold at 7s uncoloured and 10s 6d coloured. The first six plates made were lithographs, but Lycett and his publisher John Souter changed the medium to aquatint for subsequent plates, as well as re-issuing the original six prints in aquatint by July 1825. There were thirteen parts published between August 1824 and June 1825, consisting of 48 aquatints, engraved maps of NSW and Van Diemen's Land, a short history of the colonies, a list of the aquatints and a map of their correct order. The series was dedicated to Earl Bathurst (1762-1834), Secretary of State to the Colonies. All were later issued in a single volume, in which this image appeared as the 36th plate.

The subjects Lycett chose for his Tasmanian views corresponded with the places Governor Macquarie visited on his tour of inspection in 1821 with artists George William Evans and James Taylor. It is unclear whether he visited all the sites included in his 'Views of Australia'; there are no references to his inclusion in the party in Macquarie's journal. Lycett may have copied the work of others for some of the plates; certainly he changed many of the features (such as the vegetation) to comply with contemporary English ideas on picturesque composition. There is a watercolour 'View of the heads at the entrance to Port Jackson' c1819 in the Gallery's collection, from which another plate for Views of Australia was made; differences between extant versions seem to indicate that there was probably more than one 'original' drawing for each plate. Lycett died in 1828 at Birmingham General Hospital, some months after a suicide attempt, possibly precipitated by his arrest late in 1827, again for forgery.

Engraved in plate with artist's name to print l.l. beneath image, "J.Lycett ...".

Browse other works by Joseph Lycett