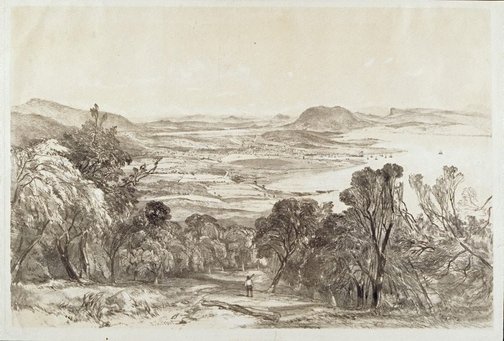 John Skinner Prout was a nephew of English watercolourist Samuel Prout (1783-1852), although there is no evidence the senior artist had any influence on him. Little is known about Skinner Prout's early life. He established himself as a professional artist and teacher at the age of 21 in England, teaching drawing and exhibiting watercolours. A member of the New Society of Painters in Water Colours from 1838, he produced his first volume of lithographs, 'Picturesque antiquities of Bristol' in 1834, and three more (Antiquities of Chester, Antiquities of York and The castles and abbeys of Monmouthshire) before emigrating with his family to Australia in 1840.

Prout brought a lithographic press with him when he came to Australia from England and began making prints upon his arrival in Sydney. His Sydney Illustrated, issued in four parts, comprises 15 lithographs including title page. He commenced Tasmania illustrated shortly after moving to Hobart in 1844; from May to December he travelled the environs of Hobart collecting material for the series. Published in two folio volumes between 1844 and 1846, 'Hobart Town from Mount Nelson' is from part four of the first volume, which consisted of twelve views on eleven plates, first issued in four parts in 1844 and as one volume in 1845. The second volume has six plates.