CONSTRUCT PC I A 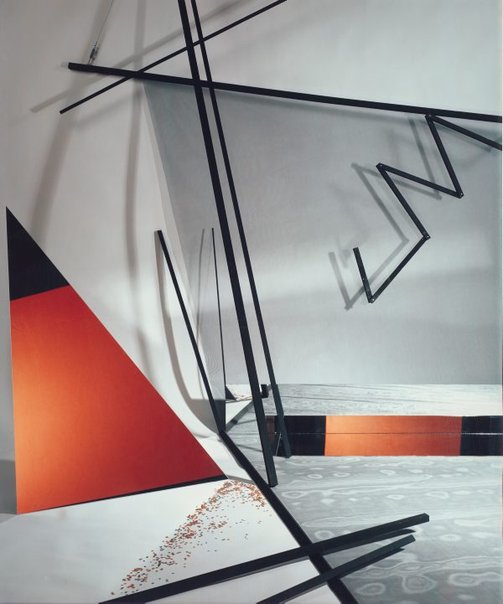 Since the 1970s Barbara Kasten has been preoccupied with the tension between three-dimensionality and two-dimensionality as it is played out on the photographic surface. While her photographs edge towards abstraction and strategically inhibit the viewer’s reading of a scene, Kasten has never relinquished her interest in the still life as a genre or her commitment to the physicality of her subjects. Constructing complex spatial structures within her studio, Kasten exploits the camera’s capacity to simultaneously transcribe and manipulate. The forms she records are crafted from concrete objects – her props – but also coloured light, mirrored reflections and shadows that all attain density and solidity before the lens. Attentive to the interaction between material and immaterial form, Kasten crafts a perceptive study of photographic theatricality. This manifests through her interest in staging and the simulation of a discrete and self-contained spatial plane upon which the drama – the ‘event’ – of the photographic act takes place but also through her examination of the complex entanglement of illusion and the real or physically articulated.

This work is the first photograph Kasten made during her participation in the Polaroid Company’s 24x20 program, in which artists were given access to a camera capable of producing the largest possible Polaroid prints (wherein 24x20 stands for 24 x 20 inches). Throughout her career Kasten produced Polaroids, the immediacy of the process appealing to her interest in the photographic ‘event’. Derived from Kasten’s most well-known series, collectively referred to as the Construct works, this photograph displays key formal motifs that are reiterated and restaged in subsequent work. In the complex entanglement of geometric forms, the distinction between surface and depth is obfuscated. Shadows and reflections are positioned with the same sensitivity and dexterity as the solid objects. Within this arrangement, the apparatus of studio set up infiltrates the scene. The objects that Kasten has assembled have been sourced from hardware stores and other industrial suppliers. Hooks, rods, stands and expandable poles are support or scaffolding structures that are hidden from view in a commercial studio setting. They hold a ‘scene’ together yet are always out of the frame. Turning these structural devices into subjects themselves, Kasten breaks the fourth wall and unveils the inherent construction of the still life scene. Embedded within this structured composition is an homage to Kasten’s earliest photographic works. The moirè fabric stretched over the lower right hand portion of the scene recalls Kasten’s 1970s cyanotype photograms of layered fabric. These photograms initiated Kasten’s transition from fibre sculpture – the basis of her early practice – to an engagement with the photographic medium. The patterning of this distorted fabric satisfied Kasten’s interest in the illusory oscillation between two-dimensional and three-dimensional form. The translation of this phenomenon onto the photographic surface was a decisive turning point, transforming Kasten’s proclivity for tactile structures into a dramatic reimagining of photographic space.

Purchased with funds provided by the Photography Collection Benefactors' Program 2017

Barbara Kasten
CONSTRUCT PC I A