Since the late 1960s, Sydney Ball has been renowned as one of Australia's leading colour abstract painters. After graduating from the South Australian School of Art in 1963, Ball made the key decision to further his studies in New York, as distinct from the more conventional route of Australian artists who travelled to Europe. For Ball 'American painting looked more exciting...something was happening.' (Denise Mimmocchi, Simon Ives, interview with Sydney Ball, April 2010).

While in the USA he immersed himself in the contemporary movements of painting including the New York School of abstract expressionism and the current wave of colour field painting. From these early artistic encounters, Ball developed his own sophisticated language of colour-based abstraction that he first presented in his 'Cantos' series, works that were initially exhibited after his return to Australia in 1965. With their bold structured forms of unmodulating colour; their precise surfaces that were removed from painterly gesture, the 'Cantos' signalled the primacy of colour expression in itself and formed part of a new direction in abstract painting in this country that culminated in 'The Field' group exhibition of 1969.

Ball began his 'Stain' painting series after a second period in New York between 1969 and 1971. In these works, Ball's formative influences of the New York school became pronounced. He dramatically altered his style from colour hard edge constructivism to spectacularly antithetical compositions of expressively layered, and ambitiously scaled, spontaneous colour movements. Ball worked on his 'Stain' paintings through the 1970s and they established the artist's position as a stylistically versatile abstractionist. Ball however declared when first exhibiting these works that style was 'quite secondary' to him. He remained singularly focused on the dimensions of colour expression.

In what is undoubtedly one of the climactic works of his 'Stain' paintings series, 'Great falls' provides an overwhelming sense of an unleashing of colour forms: the work is of an epic explosion of colour. Ball had quoted painter and aesthetic mentor Helen Frankenthaler in saying 'let painting have its own life'. In 'Great falls' Ball achieves the feel of his colour work pulsating into being.

There is a strong performative feel to colour motion in this work with paint that has been manoeuvred across the canvas in splashed, splattered, and squeegeed formations for a composition that is at once chaotic yet controlled. 'Great falls' is a result of a considered colour manipulation, with the artist purposefully guiding a pigmented layering that moves from a cool blue palette base to explosive outbursts of hot yellow/orange hues. Yet ultimately it was the tangential elements of running painting; the unscripted effects of splattered layering that accent the work's overall effect a wild colouristic improvisation. 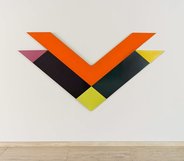 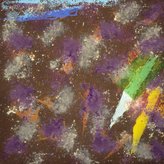 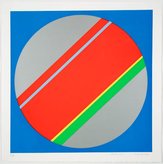 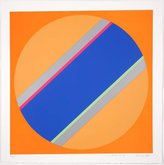 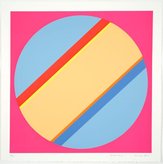 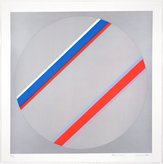