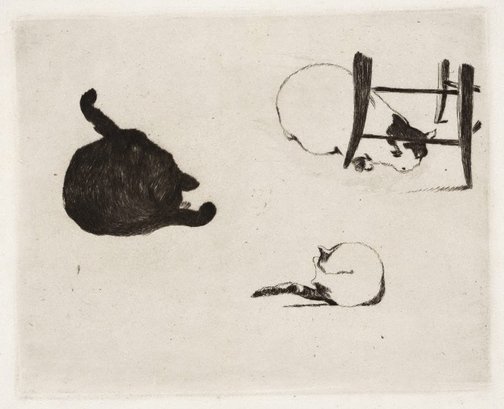 Manet made about 100 prints (etchings and lithographs) between 1860 and 1882, although perhaps none as inventive or appealing as The cats. Whereas many of his prints were the result of commissions or done expressly for publication in books and albums, this print remained unpublished during Manet’s lifetime and only a handful of proofs appear to have been printed when the plate wasfreshly completed. It was eventually issued in three posthumous editions: the 1890 Gennevilliers edition comprising about 30 impressions; the 1894 Dumont edition of 30, printed on blue-green papers; and the 1905 Strölin edition of 100. The Gallery’s impression comes from the second edition, when Louis Dumont acquired the plate from Manet’s widow.

When it came to etching, Manet was greatly encouraged by Félix Bracquemond, who acted as his technical adviser on the biting and printing of the plates. Although Manet regularly based his subjects directly on his finished canvases, The cats was an unusual exception. Manet’s novel treatment of his subject matter would clearly have been impossible in the medium of oil painting. The daring asymmetrical balance of the composition is indebted to Japanese woodblock prints, which were readily available in Paris at the time and avidly collected by artists.

Three cats in various poses seem to float in isolation on the blank sheet of paper. The feline on the left, depicted as a flat silhouette, is completely shaded with curved strokes. By contrast, the other cats – one peeping between chair legs, the other depicted smaller in scale, essentially as a ball with a tail – are drawn entirely in broken outline, with a few strokes here and there to suggest dark patches of fur.

Manet’s sketchbooks contained many studies of cats – including his own pet, Zizi – evidently observed with acute curiosity and enjoyment. On numerous occasions he incorporated them into his pictures, most famously in Olympia 1863, which features a stretching black cat at the naked model’s feet.

This print originated in Manet’s collaboration with the writer Jules Champfleury, for whose amusing book Les chats (1869) the artist had been commissioned to make an etching (Cat and flowers) and to also design the publicity poster (The cats’ rendezvous). It was in between these two jobs that Manet was inspired to produce The cats, entirely for his own amusement.

etching and aquatint on greenish paper

only state, from the edition of 30 published by Dumont in 1894

Gift of Pamela and Hanns Schüttler 2012

Browse other works by Edouard Manet