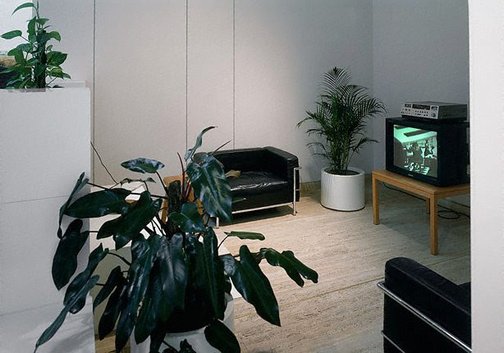 Rudyard’s interest in the writings of Marcel Proust and Stéphane Mallarmé underpins the key concerns of her new explorations, and has continued to influence her artistic vision: in Proust she found a beautiful evocation of the nature of memory and the way it clings to and slides off objects in our everyday lives, while Mallarmé shows how the abstraction of memory attaches to cultural associations. ‘This is ...’ was one of her first video installations and makes this nexus very clear. Its form consists of a simplified reconstruction of her kitchen made in the studio: a stack of glossy white cubes replicates the work bench, the floor is made of plain black and white tiles, a stool stands by the bench, while a bit further away armchairs are placed in front of a television, potted palms are arranged in the space and a highly polished toaster sits on the bench, along with a coffee cup and a plate.

The television is playing a video in which the eye of the camera slowly, meticulously, glides across the surfaces of the objects, as if caressing them in every detail. As the lens reaches the reflective surface of the toaster, it picks up the reflection of the stool’s legs on the black floor tiles but we gradually become aware that something has changed, that these are the legs of another stool on another tiled floor. As the camera pulls back, we discover the image is now Vermeer’s ‘An artist in his studio’ of c1655. The transition is seamless. A soundtrack weaves around the visual image: Rudyard’s voice describes the scene and crosses to passages from Proust while the music of Steve Reich’s ‘Violin phase’ 1967 comes in and out of phase. Rudyard’s voice is mesmerising, closely caressing its subjects in perfect parallel with the sensuality of her visual exploration.

Like most of Rudyard’s subsequent works, her everyday and domestic world is transformed into a rich tapestry of minutely observed qualities which then unfold and connect her solitary life to the world outside her window. Through a complex network of cultural connections, she takes us on a journey from the intimate and ordinary to visions of connectivity and association.

Carol Rudyard
This is...

Bruce Adams, The Australian Bicentennial Perspecta, 'Carol Rudyard', Sydney, 1987, 95, 96-97 (illus.), 98. This work was not in the exhibition but is illustrated in the catalogue.