Cameron, from the series Modern Lovers 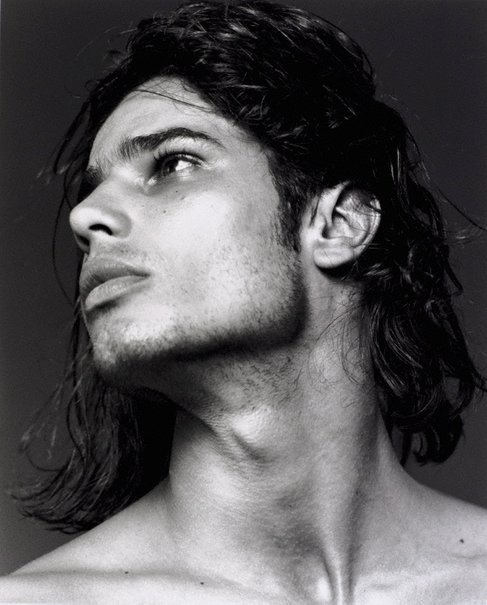 ‘Searching plays a significant role in photography. That is exactly what is suppressed in advertising and fashion photography.’ Bettina Rheims 1998 1

Like many fashion photographers, Bettina Rheims has pursued projects which explore her personal notions of individual beauty, rather than that dictated by magazines and advertising agencies. In her series ‘Modern lovers’, Rheims subverts fashionable ideals of beauty by portraying the androgyny of young men and women. Her subjects stand awkwardly before the camera against a plain studio backdrop, sometimes looking into the camera, sometimes turning away. Their ambivalence in being photographed is matched by the ambiguity they present to the viewer: these rather feminine men and masculine women confound gender distinctions, but at the same time confirm the homoerotic tendencies prevalent in much fashion photography from the 1990s. It comes as no surprise to see a young Kate Moss, who shot to fame in Calvin Klein’s homoerotic advertising campaign in 1992, among the modern lovers.

Rheims began work as a portrait photographer in 1978 and has since worked as a fashion and celebrity photographer and photojournalist. The subjects of her first exhibition in 1981 were striptease artists and circus performers – the ‘demi-monde’ to fashion and modelling’s ‘haute-monde’. Similarly, Rheims approached most of her subjects for ‘Modern lovers’ ‘on the street, in bars, everywhere’.2 None were older than 20 and all were forming their identity, coming to terms with their bodies, their sexuality and their look. Rheims, who had been a model herself before turning to photography, compares her subjects to butterflies and angels – elusive creatures in the process of metamorphosis and transcendence.

Browse other works by Bettina Rheims