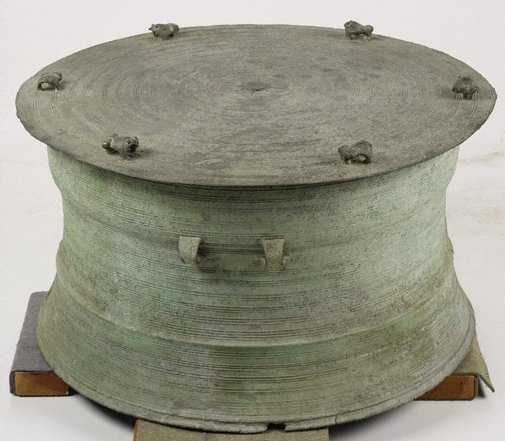 The bronze drum tradition in Southwestern China and Southeast Asia originated with the Dong Son culture of Northern Vietnam (c. 500 BCE - 300 CE). Dong Son is the name of the ancient dwelling site and funerary area on the Black River (Song-Ma) in present-day North Vietnam. From this region the drum-making tradition spread across Southeast Asia as far as Myanmar and the Indonesian islands, and into Guangxi and Yunnan provinces in China where they were produced and used by ethnic minority groups.

The drums, their technique of casting and their decoration, have no parallel in China and indicate the development of an indigenous bronze tradition in Southeast Asia. While Chinese metal-workers used piece moulds that fitted together, the drums were made using the lost wax ('cire perdue') method. Sheets of wax were used to cover a clay core. The decoration was incised into the wax, which was covered with a layer of clay. After the clay dried and hardened, the wax was melted and molten bronze was poured into the space left by the wax. The clay form was removed once the metal had cooled.

There is evidence that four-frog drums from the Guangxi region have been present in Indonesia since approximately the 3rd century CE. The drums were clearly part of the systems of alliance, trade, tribute, and exchange across Southeast Asia and Southwestern China. As part of ritual and ceremonial exchange, the drums symbolised authority. The drums were also ritual and sacred objects. They were used in ceremonies, which included playing the instruments and also pouring offerings over them. Sometimes whole drums or pieces of drums, which were deliberately broken off the bases, were buried as grave goods. Although little is known about the original function of the drums, it is generally acknowledged that the drums were probably produced to call rain. The addition of the frog motifs supports this theory as frogs croaking heralds rainfall in Asia. This motif indicates that the drums reflected concerns about agricultural success in the region. Drums were an enduring part of Southeast Asian traditions, because they were used and produced into the 20th century.

In the early 20th century, the bronze drums from Southeast Asia and Southwestern China were classified into four types. These drums (acc.nos. 9031. & 9032.) are examples of the Heger type II category, as indicated by their shape – the extended tympanum, the bulging upper section of the mantle, and the flaring foot. Heger type II drums also typically had frogs arranged on the tympanum. However, these drums are very unusual because both have six spaces for frogs. On most drums, there are only four spaces for frogs. The combination of stacked and unstacked frogs on drum acc.no. 9032 is also unusual, as usually all the frogs are either placed individually or are in stacks of two or three. There is a wide variety of motifs found on the different drum categories, and the only decorative motif common to all drums is the centre part variously referred to as a "sun" or "star" but probably symbolizing neither, as there was no tradition in Southeast Asia of representing the sun or stars with rays such as appear here (See N. Barnard, “Archaic Chinese Bronzes in Australian and New Zealand Collections,” Melbourne, National Gallery of Victoria, 1973, p. 451). In the case of Heger type IV drums, Richard Cooler has argued in the case of Karen drums that it represents a splash in a pool of water and that the concentric rings on the tympanum are ripples of water (See Richard Cooler, 'The Karen Bronze Drums of Burma: Types, Iconography, Manufacture and Use', Leiden: E.J. Brill, 1995).