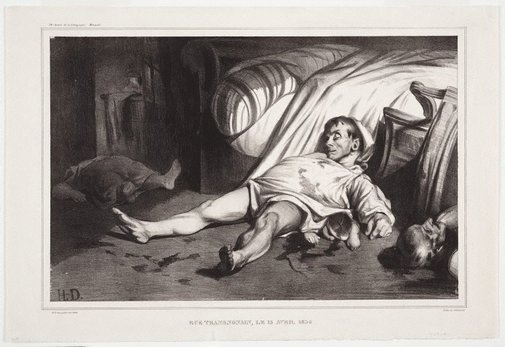 Daumier was a talented painter and sculptor but his fame ultimately rests on his prodigious output of some 4000 quick-witted caricatures produced between 1830 and 1872, a period spanning momentous political and social upheaval in France. Daumier set the standard for graphic satire, and it is with him and his contemporaries that lithography entered the realm of journalism, bringing the printed image to middle-class audiences with greater frequency and in larger numbers than ever before.

Daumier reached the height of his popularity in the 1830s after he began working for Charles Philipon’s republican- sympathising newspapers. The energetic and entrepreneurial Philipon brought together a new generation of journalists and artists who were staunch opponents of the restored Bourbon king Charles X, and then turned on the regime of Louis-Philippe, waging a war against it in the popular press. Louis-Philippe rose to power following the July Revolution of 1830 and the deposition of Charles X. However, it soon became clear to liberals that the new government (the July Monarchy) was corrupt and that the political freedoms and social reforms it had promised would be betrayed.

In 1830 Philipon founded La Caricature, a weekly paper specialising in political satire. It came out every Thursday and usually consisted of four pages of text with printed inserts: either two one-page lithographs or one folded double-page lithograph that could be removed and framed. Philipon understood that a picture speaks louder than words: he created the enduring image of Louis-Philippe as a pear, alluding to the Citizen King’s jowly face and corpulent figure, and to the double meaning of the French word poire, signifying both ‘pear’ and ‘imbecile’. Philipon’s illustrators took up the motif and Daumier used it repeatedly.

Due to more restrictive press laws, French artists did not enjoy the same political freedoms as their British counterparts. Thus Daumier found himself arrested and serving a six-month prison sentence in 1832 for his ridicule of the king. Philipon, who had also been sent to gaol as the journal’s editor and publisher, decided to establish L’Association mensuelle lithographique (a monthly print club of sorts) to help pay his crippling fines from the censor. Subscribers to the association received one large lithograph every month. Twenty-four prints were produced in total, including five by Daumier, which are considered his masterpieces.

Rue Transnonain was the final print in the Association mensuelle series and the grimmest scene that Daumier ever drew on stone. It commemorates the assassination by the National Guard of innocent citizens during uprisings in Paris in April 1834. When the army repressed the silk workers’ revolt in Lyon, unrest spread to working-class districts in
the capital. In response to gunshots from top-floor windows at number 12, rue Transnonain, troops stormed the building and opened fire, killing and wounding residents.

When Daumier’s lithograph was released six months after the event, it included a commentary by Philipon:

This lithograph is horrible to behold, as horrible as the dreadful event it recounts. It shows a murdered old man, a dead woman, the corpse of a terribly wounded man lying upon the body of a poor little baby whose head is split open. It is not a satire, it is a bloody page in the history of our modern era, a page sketched by a powerful hand and inspired by a lofty imagination. In this drawing Daumier has risen to noble heights; he has created a picture that, although painted in black on a sheet of paper, will nevertheless prove of lasting value. The butchery of rue Transnonain will remain an indelible stain on those who permitted it, and the drawing here discussed will stand as a medal struck to perpetuate the memory of a victory over fourteen old men, women, and children.

Government officials immediately confiscated the stone, and impressions of the print were tracked down and destroyed. The following year Louis-Philippe’s chief censor officially outlawed political caricature.

Purchased with assistance from Geoff Ainsworth AM 2012

Browse other works by Honoré Daumier