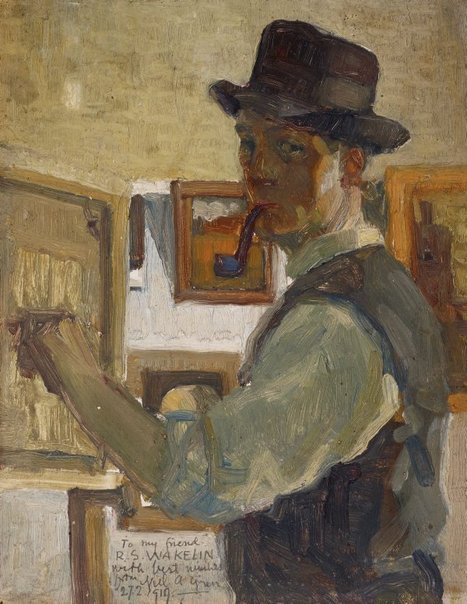 While the artist has signed this work Niel A Gren he was born Nils Ahgren and was later known as Nils Gren. Born in Sweden, Gren was in Australia by 1916, studying with Antonio Datillo-Rubbo in Sydney along with Roland Wakelin, Grace Cossington Smith and possibly Roy de Maistre. He also worked alongside Wakelin (and other artists including Lloyd Rees, Percy Leason and Albert Collins) at the commercial art firm Smith and Julius, run by Sydney Ure Smith and Harry Julius. While a temporary resident of Sydney, his work formed part of the vital movement of emerging modernist practices during the interwar period, and he was an important member of the city’s contemporary cultural milieu.

'Self portrait' painted in February 1919 was probably a parting gift to his friend Wakelin before Gren departed for America. At the time Wakelin and de Maistre would have been preparing for their seminal ‘Colour in art’ exhibition staged in that same year. The self portrait, which shows Gren in a workmanlike, rather than a romantic pose, reveals his knowledge of Wakelin and de Maistre’s works that they included in this show. The glimpses of works hanging on the studio walls behind the figure appear typical of the pair’s Berry’s Bay landscapes. This may suggests works exchanged by the artists, or perhaps Gren’s own take on these local Sydney subjects.

By the mid-1920s Gren was in Southern California working under the prominent synchromist painter Stanton Macdonald Wright, whose work had been of major importance to the colour-music experiments of Wakelin and de Maistre that they were producing on the eve of Gren’s departure from Sydney.

The Artist: A journal devoted to the interests of the graphic arts and sculpture, Sydney, Dec 1941, cover (illus.).

Browse other works by Nils Gren