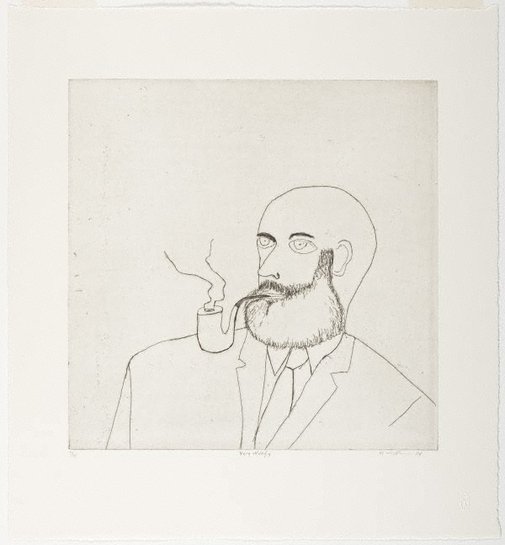 Noel McKenna is a Sydney painter, draughtsman and etcher. Born in Brisbane in 1956, he studied at the Brisbane College of Art from 1976-78, during which time he made his first of regular forays to Sydney. He eventually moved to Sydney permanently, initially to take up postgraduate studies at the Alexander Mackie College in 1981.

McKenna began making etchings in the late 1970s at art school in Brisbane and they have been a consistent part of his oeuvre ever since. This print was produced in conjunction with UNSW's COFA's Cicada Press, where it was editioned.

This etching relates to a series of paintings the artist produced in 2008, titled 'Suite of men smoking pipes'. These works were inspired by images the artist found in the process of searching for images on the internet of Cezanne's 'The card players', which depicts a man smoking a pipe, via the search engine 'Google'. The widely varied and completely random results that came of that search became the subject of the paintings.

This process is consistent with McKenna's frequent practice of working from found images; in this case, those found of the internet. Human figures in McKenna's work tend to be ciphers open to interpretation by the viewer, rather than recognisable individuals. This is particularly evident in the source for this image, which by its very nature is a de-contextualised and anonymous figure coughed up by the internet, with no direct relationship with the artist.

Browse other works by Noel McKenna 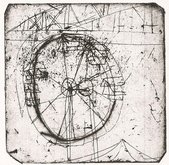 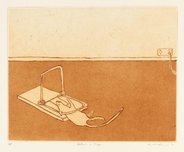 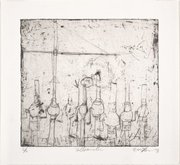 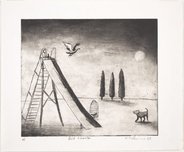