Crowned head of a Buddha 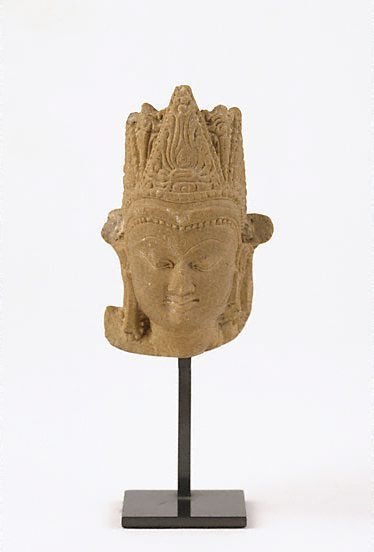 This finely carved fragment of a relief depicting the crowned head of the Buddha conforms to the Pala style of Buddha image. The Buddha is depicted with downward looking elongated eyes, framed by arching eyebrows that meet at the bridge of the nose. The 'urna' ornaments the centre of his forehead and his face is framed by an elaborate three-pointed crown. What is particularly unique about this piece, however, is the distinctive yellow coloured pyrophyllite stone, of which this fragment is carved.

Pyrophyllite is a soft fine-grained stone generally attributed to the 'andagu' stelae often thought to originate from Burma. These stelae usually depict the Buddha in the earth-touching gesture as the central figure, surrounded by scenes describing the Eight Great Events of the Buddha's life. It is most likely that this fragment depicting the Buddha's head originated from such a stele. The current scholarship regarding these stelae, suggest that some of these works may have in fact originated in the eastern states of India, around the Bay of Bengal. Undoubtedly, this example conforms stylistically with the Pala tradition of India, yet, while the origins of these stelae remain unclear, such pieces provide remarkable evidence of the deep and complex connections between Burma and Eastern India.

Crowned head of a Buddha