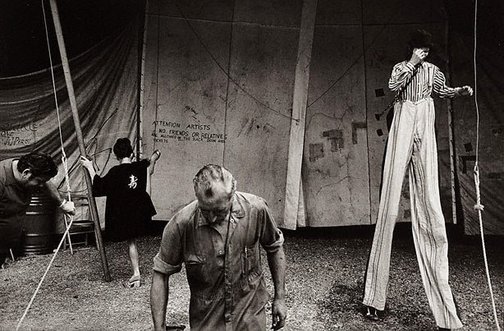 Philip Quirk learned photography at Prahran College of Advanced Education in Melbourne in the early 1970s where he studied under Athol Shmith, John Cato and Bruno Benini. After teaching at various colleges in New South Wales and Victoria he began a photography practice in Sydney in 1976 specialising in reportage. After visiting the Magnum Agency in Paris in 1980 he returned to Australia and established Wildlight Photo Agency. His photography has been published extensively in newspapers and magazines world wide. Quirk’s ongoing interest is in cultural rituals such as eisteddfods, sports days, yacht races and ballroom dancing. His black and white work has a dynamism which owes more to Henri Cartier-Bresson’s ‘decisive moment’ than to the American formalism which dominated many post war Australian reportage photographers.

‘Untitled (circus)’ is held together by the verticals of the ropes and tent details. Within this the stilt walker and acrobat are balanced by the two men, one of whom is testing a tent rope and the other is moving towards the front of the frame. The sense of movement is enhanced by the cropping of this photograph, the viewer immediately develops a possible narrative to do with the unseen circus performance of which these four are part. Quirk’s photography is very much part of the fine print tradition where attention to detail results in an elegance regardless of subject matter.

Browse other works by Philip Quirk