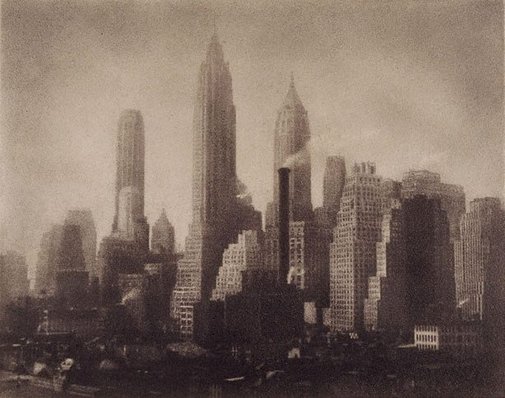 George Morris was born in Sydney and studied at East Sydney Technical College. He operated an engraving business and in 1920 travelled overseas to further his knowledge of engraving and photo-reproduction processes, visiting England, Germany and America where he spent time at the Eastman Kodak head office. A further overseas trip was made in 1936. In 1925 he became a member of the Sydney Camera Circle and began exhibiting regularly with the circle, as well as with the Photographic Society of New South Wales. He established a commercial studio in the late 1920s and later became a partner in Ramsay Photo Works.

This photograph of the New York skyline has a cinematic quality, suggestive of Fritz Lang’s 1927 film ‘Metropolis’. Morris exhibited some of his overseas pictures as enormous bromoil transfers (measuring 100 x 60 centimetres), probably the largest ever made in Australia. In ‘Untitled (New York City skyline)’ it is clear that he is concerned with conveying a sense of the scale of New York, that great symbol of modernity and progress. He manages this in a skilful, tonal way. The Empire State Building dissolves into the clouds. Alfred Stieglitz, early exponent and champion of pictorialism in America, had written:
atmosphere is the medium through which we see all things … Atmosphere softens all lines; it graduates the transition from light to shade; it is essential to the reproduction of the sense of distance. That dimness of outline which is characteristic for distant objects is due to atmosphere. Now, what ‘atmosphere’ is to Nature, tone is to a picture.1 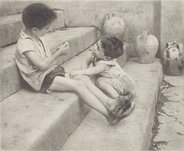