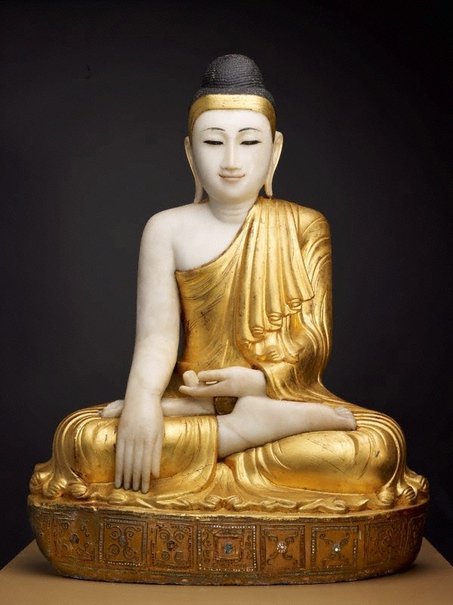 This Buddha type is typical of Burmese Mandalay-style sculpture from the mid 19th century. It is seated in the earth-touching gesture ('bhumisparsa mudra'), which has been the most popular form in Burma since the late 13th century. Typical of Mandalay-style images, the figure is solid and heavy looking, with a calm face and a slight smile. The eyebrows are naturalistic, and the elongated ears, a reminder of the Buddha’s princely origins, touch the shoulders. A thick gold band separates the forehead from the small, tight hair curls, and the Buddha’s head is surmounted by a cranial bump called an 'ushnisha' that represents the Buddha’s wisdom. The large size and rounded shape of the 'ushnisha' indicate that the image dates to the early 20th century.

Gift of Amber Johnston in memory of her father, Glen Johnston 2012. Donated through the Australian Government's Cultural Gifts Program

Schweppes family, 1920s, United Kingdom, donated to the Schweppes family in the early 1920s for the British Empire Exhibition in Wembley (opened 1924). The exhibition came to Australia in 1927.