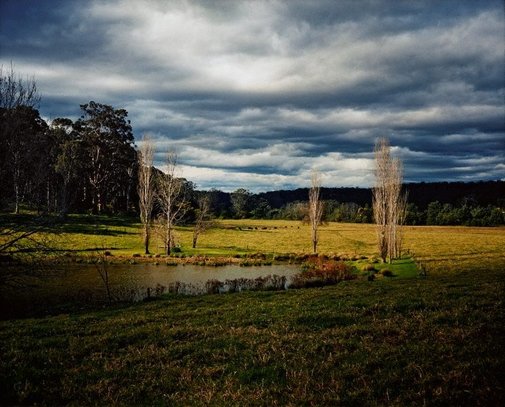 Ian North is an Adjunct Professor of Visual Arts at both the University of Adelaide and the University of South Australia. He is a photographer, painter and writer, and was the founding curator of photography at the National Gallery of Australia 1980-1984. North brings to his practice as an artist a keen sensibility and theoretical awareness of photography and art history. Throughout his career, he has been concerned with colonial narratives, established visual conventions and their impact on the representation of the landscape.

‘Haven 3’ is one of ten photographs comprising a series North created on a residency at Bundanon, Arthur Boyd’s former rural estate on the Shoalhaven River, New South Wales. W Channelling pictorial images made in the 1930s by Australian farmer-photographer John B Eaton, also in our collection, North proposes the series as a ‘celebration of pastoral beauty and as a provocation.’1 Produced in 2001, North’s photographs of Bundanon depict a true haven amongst the real and fictional horrors of the year; the events of September 11 and the imagined world in Stanley Kubrick’s ‘2001: a space odyssey’. The security, safety and splendour of ‘Haven 3’ is magnified, not only by cultural notions of sanctuary, but by comparison to the events taking place elsewhere. The trace of human intervention in the ‘Haven’ landscape is more subtle than in his previous series such as ‘Canberra suite’. The lack of human figures heightens the sense of isolation and refuge while the dark and ominous clouds hint at forces from the outside world that continually threaten the protection of such places.

Browse other works by Ian North