Nine days with a poet 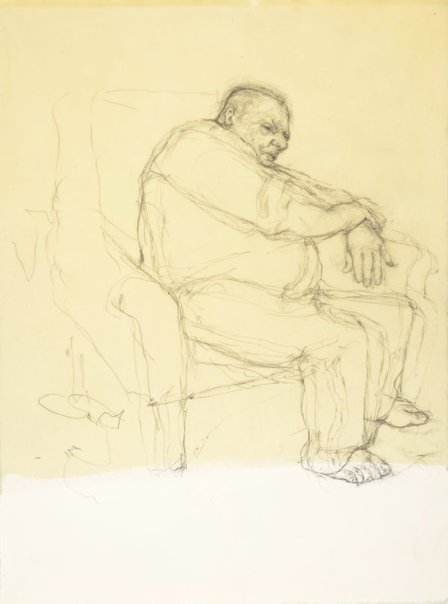 Peter Wegner studied art at the Phillip Institute of Technology (now RMIT), Melbourne in the 1980s, with further studies in 1988 and a MFA at Monash University in 2007. He has exhibited his work in solo exhibitions, predominantly in Victoria, since 1982, as well as nationally since 1977. His work is in major public collections such as the National Gallery of Australia, National Library of Australia, National Portrait Gallery and Tasmanian Museum and Gallery, as well as other Australian private and public collections.

Wegner has made hundreds of drawings, paintings and prints of the subject of this series – his friend, artist and poet Graeme Doyle - since the late 1980s, when they met as fellow Fine Arts students at Melbourne's Phillip Institute of Technology. They form a special and distinct part of his oeuvre, which also includes nudes and still life.

Wegner's portraits of his friend have followed Doyle's ongoing struggles with schizophrenia and bipolar disorder, although they were not originally intended to document an illness, but rather the subject himself. Anne Loxley describes Doyle as "a man of great intellectual and spiritual depth, not to mention charm and wit" (in 'For Matthew & others, journeys with Schizophrenia' Ivan Dougherty Gallery, University of New South Wales, College of Fine Arts, Sydney, 2006 p. 132). Graeme gave me the licence to paint him any way I chose. I believe his struggle with schizophrenia has given him insights into the human condition and because of this he was not deterred by a 'warts and all' approach. These works are a testimony to Graeme's lack of censorship, his lack of vanity and are a culmination of our friendship. (Peter Wegner, February 2002, quoted in 'For Matthew & others' op. cit. p. 132).

These recent drawings tell of Doyle's declining health with great poignancy and honesty. They were the first made at Doyle' s new home, an assisted care lodge, in 2012. The nine drawings were completed over two weeks of regular afternoon visits. The use of beeswax is a new development, which the artist sees as "like a cloud over his deteriorated physical self" (Wegner, artist's statement, 2012, AGNSW file).