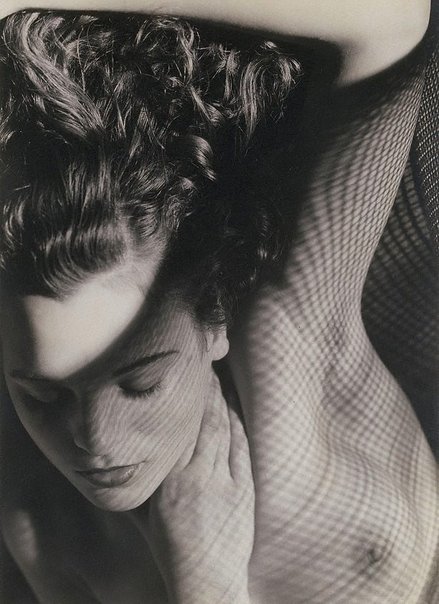 Dupain photographed both the male and female nude extensively in the 1930s. Informed by the vitalist and naturalist theories of his youth, by his interpretations of surrealism and studies of painting, Dupain clearly saw the human form as something to be mastered through the camera lens.

Jean Lorraine was a favoured model and friend of both Dupain and his first wife Olive Cotton. Here she is photographed from above with one arm behind her head and the other at her throat. Eyes closed and lips parted, most of her upper body is shadowed by the mesh which layers her body and face. Her forehead, hair and upper arm are, however, exposed to uninterrupted light, so that movement appears to sweep upwards and out of the frame. That the mesh is so disordered by the effect of light and therefore covers the body and face in a way that both softens and reveals all of its curves, results in a sensual, luxuriant image.

Gael Newton has noted in Dupain’s work ‘an emotional and sensual quality … which became more accentuated in the following years’.1 There was no forebear in Australia to Dupain in the photographic examination of the human form: there had been some attempts by Cecil Bostock (‘Nude study’ c1915–17) and Harold Cazneaux’s depictions of life classes, but no concerted efforts to master the nude in photography. While Dupain greatly admired photographers such as Edward Weston, he wasn’t aware of his work until the late 1940s or early 1950s, however the ideas to do with the depiction of the body, the life force and the importance of capturing ‘the thing in itself’ were pervasive.