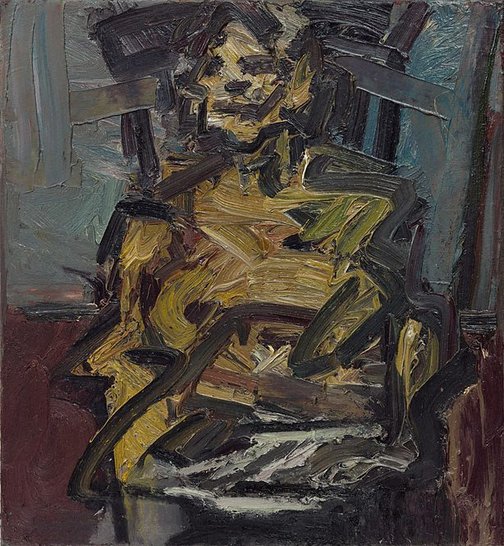 Like Lucian Freud and Francis Bacon, Frank Auerbach was a member of the School of London,1 regularly exhibiting at the successful Beaux Arts Gallery and later at the Marlborough Gallery. The group's key interest was in representing the environment around them, London's streets, houses and gardens, and friends and neighbours. The only survivor of a Jewish émigré family from wartime Berlin, Auerbach seeks comfort in the familiarity and safety of his local environment. He paints street scenes repeatedly to reflect different seasons of the year and times of the day, or numerous portraits over decades of friendship. He is considered one of Britain's pre-eminent post World War II figurative painters, and although primarily a studio painter, drawing is important in formulating his direct response to the landscape, bodily movements and textures.2

In 'Primrose Hill, autumn' 1984 (AGNSW collection), a footpath leads the viewer into an unruly landscape with a threatening canopy of trees and foreboding interior. The usual quiet, autumnal landscape of red and golden falling leaves is presented instead as a windy and savage environs heralding winter's arrival. The layering of paint, which he often applies with his fingers, belies the fact that he often completely dismantles a painting and starts again, as if in the action of creating and re-creating, the work takes on its own life. His portraiture is no less violently imposed upon the canvas. The subject of dozens of portraits, Juliet Yardley Mills is formed anew, in 'JYM Seated IV', in a surface of oil paint, a medium Auerbach likens to liquid. The excessive piling of paint is almost sculptural, reflecting a concern in common with Bacon: the aim to 'form' the body rather than merely represent it.

The visual rush experienced when viewing Auerbach's works has a distinctly dizzying effect as our meek attempts to keep up with the wildly determined marks are foiled by sudden moments of contemplation. Auerbach's 'pictorial battleground', as art historian and critic Richard Cork has called it, is fought with considered mark-making contrasted with a process of creation and obliteration, forming and erasing. It is as if the initial grid of verticals and horizontals that he employs exists only to be smashed apart to reveal a corpulent underbelly. The process of painting for Auerbach is one of physical tension and activity, which may go on for weeks and where, on conclusion, he feels that he has achieved some 'whole for this overwhelming and unmanageable heap of sensations and impressions'.3

Browse other works by Frank Auerbach