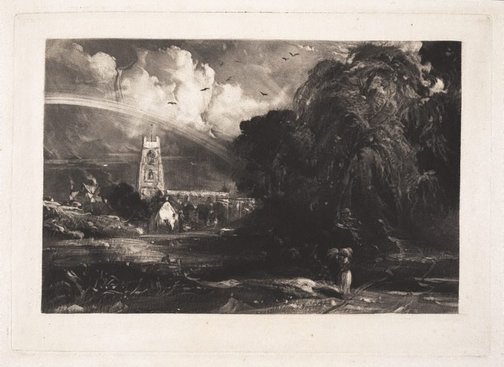 The 15th-century church of St Mary, Stoke-by-Nayland, stands in the hills overlooking the Stour Valley, in the heart of Constable country. Its outstanding feature is the ornate Perpendicular-style tower of red brick, which, ‘from its commanding height’, as Constable wrote in 1833, ‘seems to impress on the surrounding country its own sacred dignity and character’.

Constable’s earliest depictions of Stoke-by-Nayland church date from around 1810, probably made while he was visiting his elderly aunt who lived in the neighbouring village of Nayland. A few years later he returned to the scene with his sketchbook and pencil, recording the church at least seven times from various aspects and distances.
These drawings are all contained in the sketchbook
he used between July and October 1814, preserved intact in the Victoria and Albert Museum (V&A), London. This sketchbook of 84 pages is bound in brown leather; the pages measure 8 x 10.8 centimetres.

The Gallery’s sheet depicts the imposing church tower rising above the houses facing the village street, with the crenellated nave just visible on the left. The view is from the north-west, and almost identical (except for the children playing on the road in the foreground) to the marginally smaller drawing on page 21 of the V&A sketchbook. The drawing reproduced here could have been worked up from the rougher and more briskly executed sketchbook version at a slightly later date while the scene was still fresh in the artist’s mind.

Constable was born and raised in the village of East Bergholt in Suffolk. In the years between about 1810 and 1820 he devoted much time to the study of the English countryside, filling his sketchbooks with pencil studies of gentle, unassuming scenes – fields, hills, farmhouses, quiet byways and the like. His local landscape inspired his imagination and his deepest affections, confirming him in his belief that the undramatic beauties of his native county should be the subject of his art. ‘Those scenes made me a painter’, Constable famously wrote to his friend and patron Archdeacon Fisher, ‘and I am grateful’.

Some two decades after he first depicted Stoke-by-Nayland church, Constable used the building as the centerpiece of a new compositional arrangement (possibly aided by his early drawings) that would culminate in his late, large oil sketch, now in the Art Institute of Chicago. The basic format that Constable was now refining featured the church viewed at a distance across a working landscape from low ground. This is the prospect represented in the mezzotint by David Lucas (AGNSW 8300).

The plate was commenced in 1829 and underwent numerous changes before publication in 1831. Constable was prompted by the publication of Turner’s Liber Studiorum (see previous entry) to undertake his own printmaking series. Twenty-two plates, all mezzotinted by Lucas and obsessively supervised by Constable, were brought together under the title Various subjects of landscape, characteristic of English scenery, from pictures painted by John Constable, RA.

In the second ‘English landscape’ edition of 1833, the mezzotint depicting Stoke-by-Nayland church was accompanied by an extended description written by Constable: ‘The solemn stillness of Nature in a Summer’s Noon, when attended by thunder-clouds, is the sentiment attempted in this print.’ Constable goes on to make
a series of observations about the properties of rainbows before launching into a rhapsodic commentary on the churches of his native East Anglian county:

These magnificent structures are often found in scattered villages and sequestered places, out of the high roads, surrounded by a few poor dwellings, the remains only of former opulence and comfort … The venerable grandeur of these religious edifices, with the charm that the mellowing hand of time hath cast over them, gives them an aspect of extreme solemnity and pathos … The Church of Stoke, though by no means the largest, must be classed with these.

engraver's progress proof 'c' (of i)

Browse other works by David Lucas 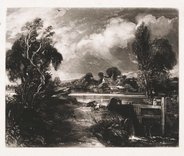 David Lucas
after John ConstableA lock on the Stour 18318304

Browse other works by after John Constable

David Lucas
after John ConstableA lock on the Stour 18318304