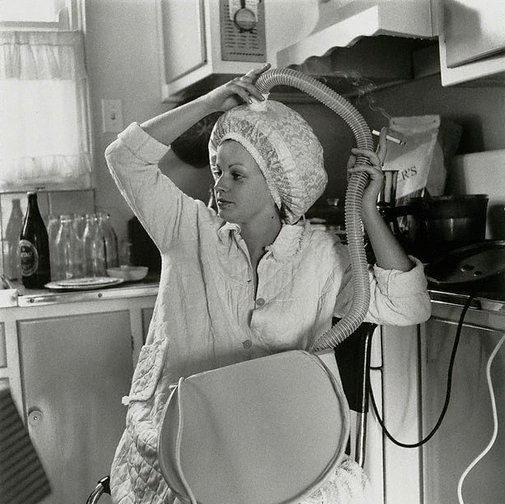 ‘My earliest “studio portraits” … were of my friends from school … These photo sessions were approached with a ceremonial seriousness, My friends usually brought different clothes with them and during the sessions we would change clothes and hairstyles.’ Sue Ford 1987 1

Sue Ford took the majority of her photographs at this time with the camera set on a 1/60th of a second at f/11, a ‘recipe’ she wrote which had more chance of success. Poetic, fragmentary text relating to Ford’s 1961 photo-essay in ‘A sixtieth of a second: portraits of women 1961–1981’ identify the young women’s recipe for flirtatious endeavour – ‘gossamer hairspray’, ‘peroxide’, ‘plucked eyebrows’, ‘big hair rollers to achieve “La Bouffant”’, ‘Saturday nite’ and ‘Jive’. ‘Sue Pike’ exemplifies the era of girls preparing for a night out with the boys in their ‘FJ Holdens and Hot Rods’. Staged in the kitchen, probably on a Saturday afternoon, Sue Pike, in a padded brunch coat with hair in rollers plugged into a portable hair dryer, will be a part of the action, the gossip and camaraderie. A further portrait taken in the same year shows Sue Pike metamorphosed as a beautiful bride, carefully coifed ash blonde hair under a white net veil, eyes momentarily shut, traditionally decorated with pearls and posy. Ford suggests in her prose and portraits that there are choices to be made – ‘marriage and children’ or mini-skirts and the Pill, as her old school friends go in different directions. 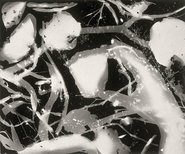