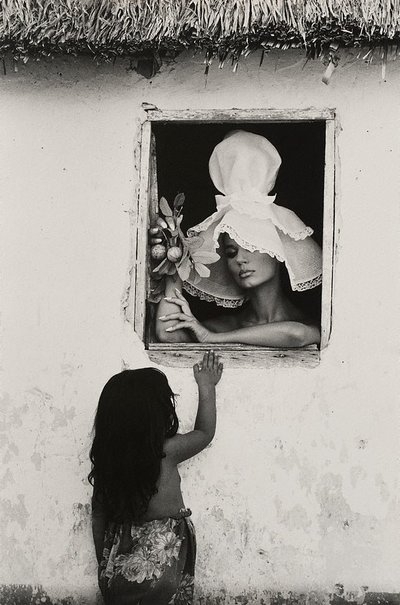 ‘When I worked for fashion magazines I had the hope that the result would look like a ‘photograph’ rather than a fashion photograph, that occasionally something else was going on there.’ Saul Leiter nd 1

Possibly because his work was as concerned with the painterly qualities of composition and colour as it was with fashion, Saul Leiter has been considered something of an outsider in fashion photography. Born in Pittsburgh, Leiter moved to New York in 1946 to pursue a career as an artist. There, he became friends with the abstract expressionist artist Richard Pousette-Dart and associated with the New York School of photographers – William Klein, Helen Levitt and Robert Frank. They introduced him to W Eugene Smith, who encouraged Leiter to photograph the streets of New York. In 1953 the photographer and curator Edward Steichen included 23 of Leiter’s works in the exhibition ‘Always the young stranger’ at the Museum of Modern Art in New York.

Leiter opened a small portrait and commercial photographic studio in 1952 and continued to paint throughout the 1950s. He received his first commission in 1957 from Henry Wolf, who became the art director at ‘Harper’s Bazaar’ and continued to use Leiter’s work. Leiter’s subtle and lyrical images provided a contrast to Richard Avedon’s dynamic and bold style, which dominated the look of ‘Harper’s Bazaar’ from the late 1950s. Colour, as much as any other component, was often the subject of Leiter’s photographs, which are drenched in rich hues. He also used unusual compositional devices, such as screens, mirrors and windows to frame his models – as seen in ‘Harper’s Bazaar, model Simone (model in hat)’. Leiter worked for ‘Vogue’, ‘Elle’ and ‘Vanity Fair’, among other magazines, and abandoned commercial photography in 1982 to concentrate on painting.

Browse other works by Saul Leiter

Saul LeiterHarpers Bazaar, Antonia (model with umbrella and nuns) circa 1963816.1996