An important conversation, from the portfolio Noel Counihan 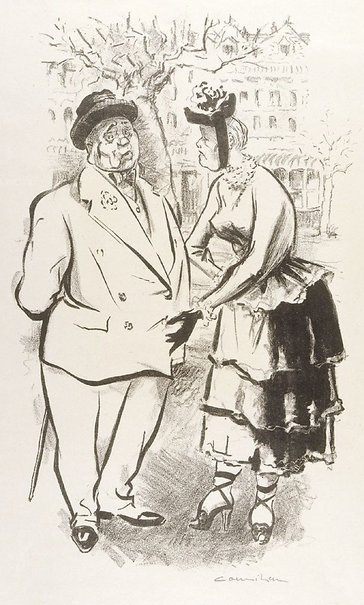 Noel Counihan was born in Melbourne, and became a committed social realist painter, newspaper caricaturist and printmaker. He enrolled at the National Gallery School, Melbourne in October 1929, studying drawing under Charles Wheeler. He made his first prints (linocuts) with tools supplied by Eric Thake which were printed by his friend James Flett in 1931, the same year he joined the Young Communist League and became actively involved in the left-wing political movement.

Thought to be one of his first lithographs, this print is number four in a folio of six lithographs published by Counihan in 1948. The images were drawn on stone at the home of Alexander Rembrandt (Rem) McClintock at Kew, Melbourne, who printed them. The cover of the portfolio had an additional lithograph A metal pourer, printed from zinc. Some were printed on Worthy Signature laid paper, but the artist had difficulties with this, and made the rest of the edition on commercial lithographic printing paper - the number of each are unknown. There were a number of related lithographs produced that were not included in the final folio of six. In 1977 the artist noted that it was a comment on the 'new look' in women's fashion. Other prints in the set were based on a visit to Ruwolt's foundries in Richmond, and portraits of his mother and son.

Hendrik Kolenberg, Everyday life: prints drawings and watercolours from the collections of Australian and European art, Sydney, 1994. cat.no: 13b